An inconvenient truth: Even tree hugging hippies have a price.

For the Santa Monica Mountains Conservancy, that price is a cool million in cash and "services".


The state planning agency that oversees open space in the Santa Monica Mountains will drop its opposition to a controversial bid by U2 guitarist The Edge to build a compound of homes above Malibu in exchange for more than $1 million in funding, consulting services and trail easements from the musician and his partners.

The Edge would like to build a compound of five mansions on the 156 acre chunk of land.  I'm sure it would fit right in.  Oh, wait...


But the project has been stymied by widespread opposition from conservation groups and the California Coastal Commission, who say it would scar an undeveloped ridgeline visible from much of the Malibu coastline and disturb geological features and sensitive habitat.

In 2009 the conservancy wrote a letter to the coastal commission strongly opposing the project, saying it was inconsistent with the state Coastal Act and would be impossible to build without “unavoidable significant adverse visual and ecological impacts.”

Gotta say, the Santa Monica Mountains Conservancy sold out waaaay to cheap.  One million has to be chump change to this guy.  Seriously, he'll probably dig it out from between the cushions of his sofa. 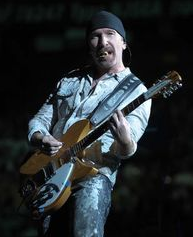 Maybe it's because I'm not celeb-obsessed, but he looks like the kind of tool who would build a huge compound in the Santa Monica Mountains.

And from our friends at The Department of Stating the Obvious:


Critics characterized the deal as Evans buying the agency’s silence.

Let's just hope the California Coastal Commission and The Sierra Club (both mentioned in the article as still opposing the development) can withstand the siren call of The Edge's filthy lucre.