Leader of the Free World as Comic Relief: A Jolly Good Twofer

Looks like I picked the wrong week to start jotting down Obamaisms!  On the other hand, I've been wanting a full time job and now it looks like I've found one, so maybe I should quit my bitching.

President Obama is visiting England and yes, hilarity has ensued.  First, he decided to immortalize his visit in writing at Westminster Abbey.  Big mistake. 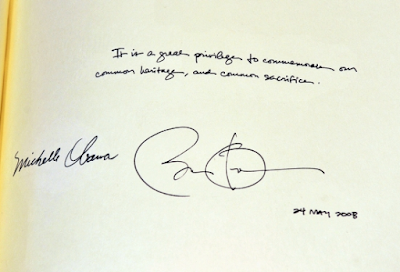 It's one thing when I can't remember what day it is.  It's another thing entirely when the President of the United States doesn't know what year it is.
Although in his defense, May 2008 was a much happier time for him.  I can understand him wanting to remain in that moment.

And then he really fucked up:


Well that was awkward.
It pretty much goes without saying that if Bush had pulled either of these boneheaded moves he would have been raked over the coals as the most defective idiot ever to hold elected office...and rightly so.   Luckily for Obama, the bulk of the press gave him a lifetime pass some time ago.  57 states?  No problem!  No sense of protocol?  No problem!  Two major screwups in one day?  No problem, the media has his back!

Luckily for the rest of us, there's the internets.

All joking aside, that was a pretty scary face he pulled when he finally had to admit defeat and shut the hell up.  He knew he'd just totally humiliated himself big time and he wasn't happy about it.  Those Brits are lucky there wasn't a flamethrower within reach.  It could have gotten a lot uglier.  God save the Queen, indeed.

Isn't someone in Obama's position supposed to have people who are responsible for prepping him for events like this?  The average American can't really be expected to have a handle on British royal protocol, but the President isn't the average American.  Did he refuse to be bothered to learn this stuff or is his staff just that inept?  Either way, heads are gonna roll!  In fact, in my fictionalized version of this comedy of errors, post-humiliation he walks into a room of staffers and screams, "Off with their heads!"
Posted by Melinda at 10:59 AM
Labels: Famous Idiots, I could use this in a script, LOL, State of the Union