I've been writing very little lately.  In fact if it wasn't for blogging, I'd have probably forgotten how to type by now.  There was the whole serious illness followed by death in the family thing, followed by the unfortunate family drama thing.  Take it from me, real life can put one heck of a damper on your creativity.   Add in an enforced, lengthy absence from Los Angeles and you've got a miserable, unproductive and very homesick writer.

Then yesterday afternoon I decided to do the artsy thing, packed up my current project and headed for the beach, hoping the location would offer to volunteer as muse.  And boy did it, way beyond any reasonable expectations.

My seemingly eternal White Collar spec is the current work in progress that I really need to finish so that I have something for scriptwriting competitions.  How long is it taking me to complete this thing?  Since I started it, I've gone from rabid fan to barely watching this show anymore.  Not good.  Way too long.

Despite the fact that it was up to about 50 pages, this script was far from done.  I was happy with the dialogue and the case.  I was even able to work in a questionable piece of real life "art" from a co-worker's hilarious story about her trip to an exhibition populated by a bunch of pretentious artsy types.  The problem I was having was figuring out how to actually solve the thing.  I didn't have the all-important the "gotcha" moment where all is revealed.  I had a great idea and some fun moments, but no story.

I'd faithfully painted my hero into a corner: Neal admits to being at an art gallery the night its shiny new display is stolen but denies any involvement with the theft, only to have his story contradicted by his tracking anklet, which shows him nowhere near the gallery.  Is he lying?  Is the tracker malfunctioning?  Why would  a world-renowned art thief turned Fed claim to be at the scene of a crime he didn't commit?  And how awesomely would this play into the ongoing trust issues between the charismatic career criminal and his salt of the earth FBI handler?  Pretty damn awesomely, that's how, except for the part where I couldn't figure out how to tie it all together and actually make it all work.  So many hows and whys, but no answers.

Until yesterday, in the blissful atmosphere of a Kona beach, when I suddenly figured it all out.  I was sitting at the pristine shoreline, script and pen in hand, observing everything around me and marveling at its calming influence.  And suddenly things just happened.  I don't know how or why, but everything came together.  I waded in crystal-clear water then sat on the shore with sand between my toes and inspiration struck. 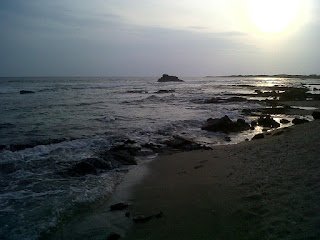 I suddenly had all the answers I needed and for a couple hours yesterday, all was right in my world.  The beach provided little muses: beautiful pieces of coral, recently shed anenome shells, a lone hermit crab patiently making his way through tidepools formed from lava rock and the ocean's ebb and flow, ominous but beautiful slate-gray clouds in the distant skies above Kona's coffee-growing regions and the answers to all life's mysteries.  Okay, that last part is an exaggeration.  It was only the answer to one of life's mysteries.  But it was the one I needed at that moment: the mystery of how to make my White Collar spec work.

I'll take it.  Especially after the heinous, non-productive last couple of months I've had.  There is light at the end of my White Collar tunnel.

Posted by Melinda at 10:45 AM
Labels: Hawaii, TV Specs, Writing