So, because flying isn't already annoying and stressful enough, you arrive at the airport to discover that this classy and charming fellow is on your flight and even worse, the airline doesn't do jack about it: 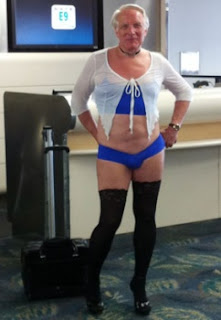 It's called dressing appropriately for the occasion.  You might want to look into it, loser.
That's right, US Airways employees ignored complaints from other passengers and allowed this idiot to board in this getup.   A week later the same airline took exception to a passenger wearing sagging pants and the result was his arrest.  I'm not a fan of the saggy pants by any stretch of the imagination, but at least he was actually wearing pants, however ineptly.  Not to mention Mr. Saggy Drawers defense lawyer just got a big, fat early Christmas present thanks to the jackass in the stripper outfit and US Airways refusal to deal with him.

In addition to the planeload of people who had to fly with this idiot, I have a feeling a lot of potential customers just crossed US Airways off their list of airlines after reading this article.  I know I have.  No way I pay for the privilege of being subjected to this crap.

And it just figures this happened in San Francisco.   That place makes L.A. look like middle America sometimes.
Posted by Melinda at 3:55 PM
Labels: Jerks