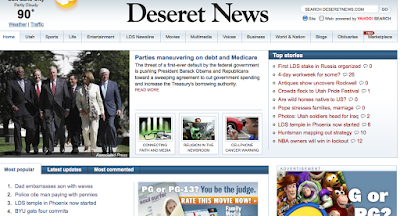 Next up, and even better is the number two most popular story in the Deseret, Utah area: Police cite man paying with pennies.


VERNAL — A Vernal man has been charged with disorderly conduct after police say he caused alarm when he paid for a disputed medical bill in pennies.


On May 27, Jason West went to Basin Clinic prepared to dispute an outstanding bill, according to Assistant Vernal Police Chief Keith Campbell. West, 38, apparently did not believe he owed the clinic the $25 it said he did.


“After asking if they accepted cash, West dumped 2,500 pennies onto the counter and demanded that they count it,” Campbell said. “The pennies were strewn about the counter and the floor.”


Clinic staff told West they were calling police and he left the office. Officers caught up with West later and issued him a citation for disorderly conduct, an infraction, which carries a potential fine of $140.

The case will be heard in Vernal City Justice Court.

Potential $140 fine (plus, I assume, cost of a lawyer) in return for making a disruptive statement over $25?  Forget Vernal PD, this guy was busted by the Karma Kops.

I'm not familiar with the Deseret News and I wouldn't be surprised if someone informs me that it is in fact just a local version of The Onion.  Either way - legit or Onionish - I don't care, today's issue was entertaining as hell.

H/T Sami_Shamieh on Twitter for linking to the pennies from hell story.
Posted by Melinda at 10:20 PM
Labels: LOL