Is that a bat in your pocket or are you just enjoying the game?

Call me old fashioned but I really think the new Amarillo Sox mascot is, in a word, inappropriate.  Hey kids, say hi to Pervy the Sock! 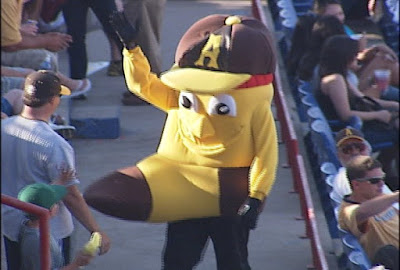 Suddenly Vancouver's Green Idiots are looking like sharp dressed men.
Sadly, it appears Pervy's reign will be a short one:


...the Sox mascot was supposed to look like a sock but looked nothing like (General Manager Mark) Lee had requested. Instead of a soft looking sock-type mascot from nearly head-to-toe, the foot portion of the sock stuck straight out about 2 feet at the waist.

“It was not the way I wanted it,” Lee said. “I’m very disappointed in the lady who did it, and I’ve told her so. She is going to fix it to the changes we want. I want to say on the record, if we offended anybody, I apologize.”

Oh admit it, you couldn't have bought this much publicity for your minor league team.  Also, why put the unfortunate costume out there in the first place?  Did they think maybe no one would notice?

Disturbing photo of Pervy snicked from Josh's Blog, which very accurately described him as "the Halloween costume of a sex offender".  Awesome pic of awesome Bailey snicked from his Facebook page.
Posted by Melinda at 12:43 PM
Labels: LOL