The definition of unintended consequences

So a couple of hyper-sensitive, PC types got their panties in a wad over a novelty candy critical of Obama's lack of accomplishment in office and the result was that the candy was pulled from the shelves of the University of Tennessee bookstore that had been carrying it.

And then the story made the news and exploded all over the internets, and people who would have never heard about this candy found out about it and went looking for it.  The result?  The manufacturer was bombarded with orders. 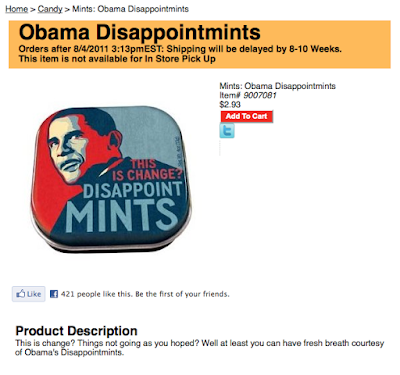 Note the part where delivery will be delayed 8-10 weeks.  Weeks!  Good to know that someone's business is booming in this weak-ass economy.
According to the article, the same bookstore used to carry a similar product directed at former President Bush.  In addition, my Mom and I once picked up a tin of "Last Supper After Dinner Mints" at the Fair Oaks Pharmacy in South Pasadena.  We thought they were hilarious.   But unlike the people involved in the University of Tennessee removal we actually possess a sense of humor.  I've never heard of the Bush or Last Supper mints causing a ruckus.

If you want some Obama Disappointmints of your own (and don't mind waiting) you can get them at Richards Variety Store.
Posted by Melinda at 2:49 PM
Labels: Foodie Stuff, LOL, State of the Union