So apparently the end of our space program has left our NASA science types with a little too much free time on their hands.  Boredom has set in and they are now reduced to the speculation of some cah-razy must destroy humanity for the sake of the galaxy "theories".  And of course there is a "green" angle.


It may not rank as the most compelling reason to curb greenhouse gases, but reducing our emissions might just save humanity from a preemptive alien attack, scientists claim.

Watching from afar, extraterrestrial beings might view changes in Earth's atmosphere as symptomatic of a civilisation growing out of control – and take drastic action to keep us from becoming a more serious threat, the researchers explain.

This highly speculative scenario is one of several described by a Nasa-affiliated scientist and colleagues at Pennsylvania State University that, while considered unlikely, they say could play out were humans and alien life to make contact at some point in the future.

The authors warn that extraterrestrials may be wary of civilisations that expand very rapidly, as these may be prone to destroy other life as they grow, just as humans have pushed species to extinction on Earth. In the most extreme scenario, aliens might choose to destroy humanity to protect other civilisations. 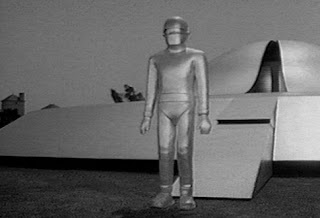 Preachy aliens show up to tell us how to run our planet.
When I read stuff like this the writer in me wants to break out a rolled newspaper and go into "bad dog" mode.  No no no, not the "aliens threaten cold, destructive, naughty earthlings" storyline again!  It's been done to death.  We've seen it a million times.  Can't you come up with something a little more original? 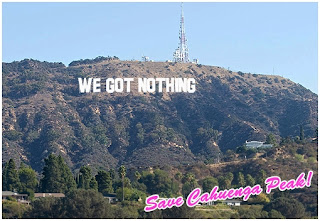 No, not you Hollywood, I'm talking to the scientists this time.
But wait, there's more!

...They might invite humanity to join the "Galactic Club" only for the entry requirements to be too bureaucratic and tedious for humans to bother with. They could even become a nuisance, like the stranded, prawn-like creatures that are kept in a refugee camp in the 2009 South African movie, District 9, the report explains.

The most unappealing outcomes would arise if extraterrestrials caused harm to humanity, even if by accident. While aliens may arrive to eat, enslave or attack us, the report adds that people might also suffer from being physically crushed or by contracting diseases carried by the visitors. In especially unfortunate incidents, humanity could be wiped out when a more advanced civilisation accidentally unleashes an unfriendly artificial intelligence, or performs a catastrophic physics experiment that renders a portion of the galaxy uninhabitable.

It's called fiction, and we already have people working on it.  Sorry your space program got trashed, but I guess you're just going to have to find a new line of work.  May I suggest unpaid community organizer, perhaps?

Or maybe it won't be our war-like tendencies or carbon footprint that eventually condemns us in the eyes of the galactic world court.  Maybe we'll just stand in the path of progress. 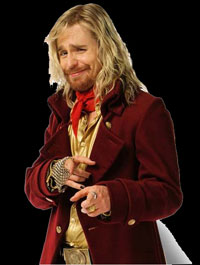 Earth.  Possibly only the second-worst leadership in the galaxy.
Posted by Melinda at 10:16 AM
Labels: Film, LOL, Stranger Than Fiction, Writing