This post originally appeared on my previous blog, Rose Parade, on September 11, 2006.  It is reposted and updated as part of the ongoing Project 2,996 and to mark the 10th anniversary of the 9/11 attacks.

Before he went to work at the World Trade Center five years ago today, this was Evan J. Baron:


He was a 38 year old resident of Bridgewater, New Jersey and was a successful energy futures specialist for Carr Futures on the 92nd floor of the WTC.


His wife was Jeannine. When they met she was a shy receptionist who flaked out of their first date.  He was a not-so-shy floor trader who persevered.


Eventually they married and had two children, Ethan (now 11) and Julia (now 7).


Evan was a devoted family man of whom his own father said, "He never lost sight of family as the most important thing," Irwin Baron said. "I was in awe of how he grew up -- a wonderful father and a wonderful husband." His sister considered him a dual blessing: "He wasn't just my brother; he was my best friend," Julia Driscoll said.


He loved guitar and golf and was a cigar and scotch buddy to Michael Spinella.  He was a treasured friend and business associate to many.


Today I am honored to honor Evan J. Baron as best I could as part of the 2,996 Project. 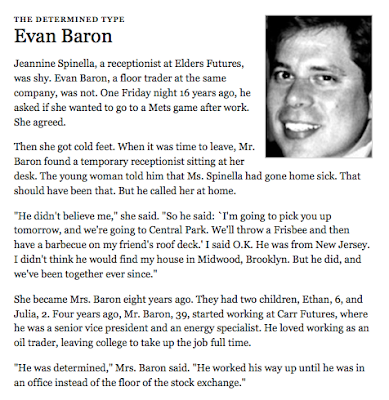 This was pretty much all I could find in my attempts to update my post about Evan.  He would have been forty-eight had he not been killed.  His children are now sixteen and twelve.  I hope they and Evan's other family and friends are doing well.
Posted by Melinda at 7:22 AM Labels: Project 2996

One of my best friend's uncle. I know she's missing him a lot today...thanks for posting this. Nice to see people care

He won't be forgotten. My best to his family. I don't know how people cope with this kind of thing.

My father.....I miss him so much this article is truly amazing thank you for taking the time I appreciate this