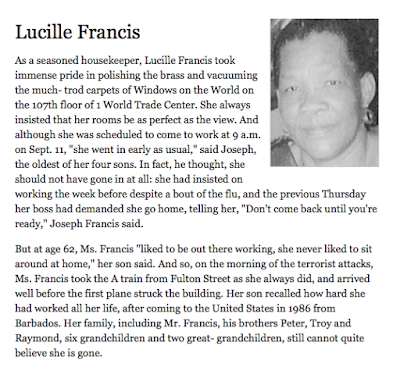 Virgin "Lucy" Francis was on the job as a member of the housekeeping staff at the famous Windows on the World Restaurant in One World Trade Center when the building was struck by American Airlines Flight 11 on the morning of September 11, 2001.  No one in the restaurant, located on the top floor of the building, survived the attack.

The profile of Lucy pictured is from Portraits of Grief, a series run by the New York Times as part of their coverage in the aftermath of the attacks.

Other than appearing on countless online lists of the dead I was unable to find much else about Lucy.  However the brief NYT article speaks volumes about what kind of person she was.  Active and hard-working at an age when most people are gazing longingly at retirement, she didn't even have to be at the restaurant at the time of the attack.  She wasn't due to start work until 9:00am (American 11 hit the tower at 8:46am) and had recently been ill with the flu.  She could easily have stayed in bed that day.  Instead, she headed to work early.

Lucy was survived by four sons, grandchildren and great-grandchildren who could no doubt fill pages (online and off) with her story and who no doubt still miss her terribly ten years after her death.

Pet Harbor, an animal rescue operation in Virginia, began naming their rescuees in honor of those who were lost on 9/11.  In 2009 this Siberian Husky puppy was named for Lucy.

On the 10th anniversary of the September 11 attacks and as part of Project 2,996, I am honored to remember Lucy Francis, who lost her life that day.
Posted by Melinda at 7:05 PM
Labels: Project 2996

Thank you for taking the time to remember Lucy.

My pleasure. I just wish I'd been able to do more of these. There's a lot of people whose tributes have dropped off the internets over the years.