The Kings don't officially start the season until tomorrow (in Stockholm, vs. the suddenly much less douchey NY Rangers) and the home opener isn't until the 18th, but the 2011-2012 NHL season officially began today with the Habs, Leafs, Pens, Canucks, Flyers and defending Cup champion Boston Bruins in action.  So in honor of that, here's one of my all-time favorite hockeys ads:


And since I'm at it, one of my all-time favorite hockey pictures: 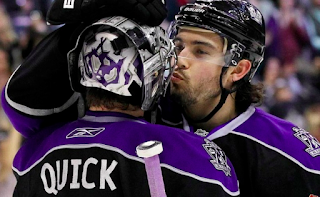 Get a room, you guys...a room to CELEBRATE A CUP WIN IN, THAT IS!!!
For the first time since the Gretzky era, the Kings are a solid, legitimate Cup contender.  It's going to be a great season!  GO KINGS GO!!!