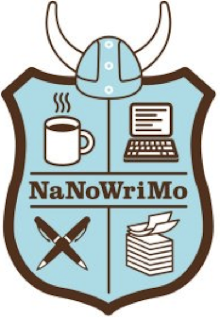 "No plot, no problem!" has been NaNoWriMo's slogan forever, and is in fact also the title of a book by NaNo founder Chris Baty.

Why do I mention this?  Because as of November 14, my "novel" is up to all of 3,250 words and to meet NaNo's goal of 50,000 words, you need to write 1,667 words per day.  So I'm ridiculously behind.  I think it's because short stories like the one I'm using for NaNo are short stories for a reason.  Because they're short stories, not novels.  But then again, it took doing NaNo for me to realize that.  Enough of a plot to power a short story but not a novel, at least not yet.  My main character is going to need some development before he's going to be able to carry a novel-length story on his own.  Isn't going to stop me for going for the mad dash to the finish.  That's the thing about NaNo - it doesn't matter if it's working, you just write.

The real beauty of NaNo is that ultimately it's a crapload of fun and although I'll probably never win at it, I'll still come back to it year after year.  Why?  Because it's simply all about the sheer joy of writing and everything that goes with it.  Even when it eats your soul.  Especially when it eats your soul.  That's how much we love doing it.
Posted by Melinda at 8:28 PM
Labels: Writing