What we learned in culinary school this week: Week 9

Butchery demo kicked off the week: 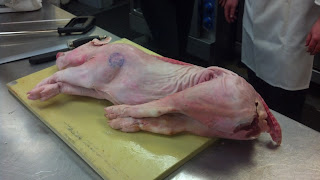 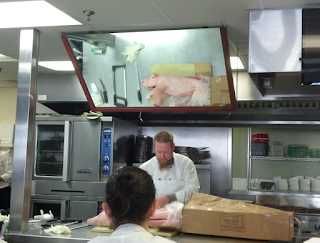 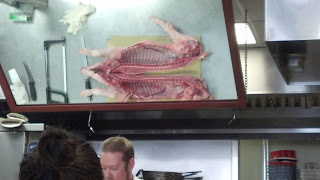 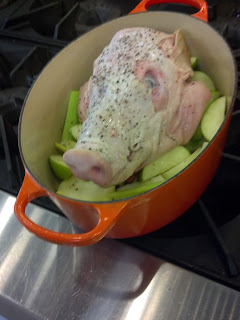 "Pork butt" is actually the back of the pig's shoulder.

Pork stock is not a part of traditional French cooking, but is used in Japanese cooking.

Pork belly is uncured and unsmoked. Bacon is smoked. Pancetta is salt cured and is not smoked.

Leaf lard (fat from around the pig's kidneys) is primo lard for baking. Pork fat is rich, sweet and buttery and has the ability to take on the flavor characteristics of food you cook with, so if you use it in pie crust it won't taste like pork. If you used suet, it would taste like beef. Jowl fat is also primo fat; both jowl and leaf lard are expensive, but can be ordered online.

145 degrees is the maximum internal temperature for pork. It's okay if the meat is still slightly pink. Trichinosis from undercooked meat was eradicated in the U.S. in the 1960's.


We cooked pork in both wet and dry heat. Here's one of the results:


Thursday was charcuterie day. First off, pate is gross. We got to make sausage, which was great, although piping the links into the casings is a lot harder than they make it look on Food Network. Sausages can be fresh, smoked, cured or air-dried. Shoulder and shoulder fat (along with odds and ends) are best for making sausage. You can order shoulder meat with a big piece of fat on it from a butcher. Pate uses better quality of fat (belly and back fat) but is still gross.

When grinding meat and fat together, both must be cold. You can play around with different sized grinds.

Basic sausage is meat, fat, seasonings and casings. You can go from there. We got to choose from a variety of ingredients on hand and each pairing came up with some really varied and interesting combos. My partner and used dried cherries and it turned out really well! In fact, if you are going to use fruit in sausage, you need to use dried, not fresh.

Casings (from animal intestines) usually come from hogs and can also be synthetic, however synthetic is considered undesirable. They are ordered either by the foot or "hanks" (30 feet per hank).

Our sausage recipe: 3 handfuls chopped dried cherries (I would use more in the future), 1/2 cup brandy, fennel, rosemary, thyme, salt and pepper.

Next week: Our first lunch service!