Oof - only four books in September.

This is the improbable true story of a little mare who served with distinction alongside U.S. Marines during the Korean War.

Originally bred as a racehorse, she was reluctantly sold by her Korean owner to the Marines so he could pay for a prosthetic leg for his sister, who had been injured when a bomb went off in a rice paddy she was working in. The Marines renamed the mare Reckless (after their Reckless Rifles Platoon) and put her to work carrying ammo and their wounded through miles of firefights. In addition to being an amazingly quick learn, she performed her terrifying tasks with supernatural bravery and became a beloved member of the platoon.

After the war, rather than leave Reckless behind, her fellow Marines arranged for her to be shipped to the U.S. to be cared for for the rest of her life. She was retired to Camp Pendleton, eventually being promoted to Staff Sergeant. She was also awarded two Purple Hearts, in addition to other military honors, and was even awarded her own Breyer Horse Model.

I approached this story as a horse lover. There's a lot of detail in this book about the weapons and military strategy, which is kind of lost on me, but if you like that stuff and can follow it, there's a lot of info there. But even without that aspect to hold my attention, the story of Sgt. Reckless was fascinating and kind of mind-boggling. I've ridden and handled horses, and the idea of one going out and delivering supplies unsupervised with a battle going on around her is unbelievable. She was truly special. 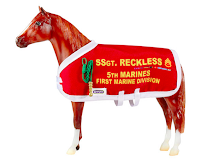 "She first stirred American hearts in April 1954, when Marine Lieutenant Colonel Andrew C. Geer detailed her Korean War exploits in the Saturday Evening Post. The feats of heroism were so great that Reckless was eventually promoted to the rank of staff sergeant in the U.S. Marine Corps. She was no mascot. Reckless was the real deal - an actual combat Marine."

(Note: The worlds of novel Dexter and TV Dexter went in very different directions after the first season of the Showtime series, which used the first Dexter novel as a blueprint for Season 1. In the novels, Dexter's brother Brian wasn't killed and in fact resurfaces in the current book. Rita wasn't killed until the end of the previous book, and after she and Dexter were married they had a daughter, not a son, and somewhere in one of the novels I've missed Deb had a son. I think that pretty much covers what you need to know going into this book.)

After the events of the previous novel (Dexter's Final Cut), everyone's favorite sociopathic serial killer finds himself held without bail, framed for a murders that he actually wasn't responsible for (including Rita's) and he is not amused. Literary Dexter is a true sociopath in that he genuinely does not concern himself with anyone else, it's all about the misfortune that's befallen him and he's pretty put out about it. They humanized him at times in the series and I think that was probably a good call for a TV audience, but Lindsay never went there with Dexter. Lindsay's black humor is in rare form; Dexter's unrepentantly self-absorbed "poor me" musings on the unfairness of it all are hilarious. Unfortunately for Dexter, his luck really has run out. What seems like a ticket out of this situation only gets him into another deadlier situation and then...well, it isn't like Lindsay didn't warn us.

"Brian had two storm anchors in the back of his van. We wired Octavio to one and his new friend to the other, and muscled them both into the water of the quarry. They sank quickly, leaving not even a ripple to show where they had been, and I tried very hard not to see that as a metaphor for my life at the moment. It didn't work. All I could see was the sad Detritus of Dexter sinking into the dark abyss, cold and murky water closing over my head, leaving no trace at all of the wonder that had been Me."

Mr. CSI: How a Vegas Dreamer Made a Killing in Hollywood, One Body at a Time (Anthony Zuiker and Todd Gold)

Anthony Zuiker (creator of the CSI franchise) was at his desk in the writer's offices of CSI: New York when he received a call informing him that his estranged father had eaten his gun. This memoir is largely the story of him grappling with their lengthy estrangement and the question of what drove Zuiker Senior so low that he took his own life, while also detailing his own journey to Hollywood success.

Zuiker explains that the book was originally intended to answer a question he got frequently: "How'd you do it? How did you go from driving a tram at the Mirage Hotel for eight bucks an hour when you were twenty-six years old, to creating the most profitable franchise in TV history?" And in a way he does - his obsessive drive to succeed - and succeed wildly - was largely influenced by his deprived childhood and his troubled relationship (and eventual lack thereof) with his father, who once told his teenaged son that he wished he (Anthony) had never been born. Zuiker wanted to prove that he could attain the kind of success his father sought but never achieved.

As fascinating as Zuiker's story is, some of my favorite parts of the book were when he described some of the things he saw while with police, crime scene investigators and coroners in Las Vegas, Miami and New York (which was still dealing with the remains of 9/11 victims) as each version of CSI was being developed. Some crazy stuff in there. Real life crime is a hell of a story.

If you're interested in a behind-the-scenes look at the CSI shows, this isn't it. There's interesting information on the development and launch of each show and some neat stories about Zuiker's first meetings with the actors who would be his leads (William Petersen, David Caruso and Gary Sinise), but that's about it. This is his story, not CSI's.

"I wondered if he knew about CSI. The local papers had done stories about me before last Christmas and I had been mentioned in a few other features about the show. It was likely he knew. Surely one of his friends had shown him the Las Vegas Sun or USA Today and said, "Isn't that your kid?" I would've loved to have heard his response, but then I'd accepted our lack of a relationship long ago for what it was."


The Little Rascals: The Life and Times of Our Gang (Leonard Maltin and Richard W. Bann) 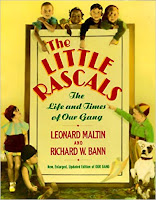 An unbelievably comprehensive - almost overly comprehensive - bible of the beloved series. Every child actor who was part of the series is covered and every single episode is reviewed, with cast and crew listings for each included. It's also loaded with photographs. Just a warning - it was published in 1992, so a lot of the players who were still alive then are now gone.

"In 1987 he (original cast member Ernie Morrison, aka Sunshine Sammy) was inducted into the Black Filmmakers Hall of Fame, and defended Our Gang from criticism that it made fun of his race. "To me, that's foolish," he responded, "because what these kids are doing has nothing to do with prejudice. If you look at kids, you'll see they do the same things today." He remained devoted to Hal Roach, and declared, "When it came to black people, the man was color-blind."