Only three this month. I spent the first half of the month mostly working on my short story for the Guppies anthology, so the only thing I was reading during that time was a previous Guppy collection. Plus I've been plowing through all five seasons of Breaking Bad and that's been taking up a ton of my time.

I Am Not Ashamed  by Barbara Payton

I've had this in the logjam that is my Kindle but had never gotten around to reading it until now. I was prompted to do so after watching Kiss Tomorrow Goodbye, in which Payton co-stars with James Cagney and was startled not only by how genuinely beautiful Payton was, but also how good of an actress she was, holding her own with Cagney. I'd heard the story of Payton's sad fall from stardom, but wasn't expecting her to be much more than a sultry face. The fact that she had both great beauty and talent just makes her story all that much more tragic. She had both the looks and the goods, but allowed her off-screen hijinks to derail what appeared to be an extremely promising acting career.

Payton makes no apologies for how she lived her life, both the good and bad. Her looks and drive got her into the movies and even when the industry tossed her aside, she still remained in town, drinking heavily and eventually falling into prostitution. She makes it clear that to make it in Hollywood you have to play games of sex and politics and she tackled both aspects ruthlessly and without apology. The book is brutally honest and Payton doesn't express much in the way of regret for anything she did, pre, during and post stardom, or for how her alcoholism robbed her of her self-respect and beauty, and shredded her reputation. She also doesn't attempt to duck responsibility for her actions and what they did to her life and career; I have to respect her at least for that. But it really is a shame that she seemed determined to be her own worst enemy time and time again. She had a lot going for her and threw it all away.

In addition to all the lurid stories about Payton herself, a lot of rumors abound about the writing of this book. There are rumors that she didn't actually write it (although she agreed to having her story told and laid bare) and that she requested to be paid in red wine rather than cash so that her creditors couldn't go after the money.

It was Christmas Eve and I was drinking more than usual and was full of the sad sentimentality of the season. I was broke and needed a trick or two. I made some teasing phone calls and finally hooked an actor friend of mine but he only had fifty dollars. I told him to come over anyway. 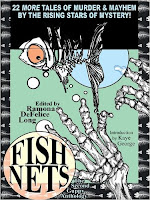 Like the anthology from last month, I read this to try to get a handle on what the new Guppy anthology would be looking for in terms of submissions.

Fish Nets is similar to the previous anthology in terms of content and quality. The theme was "fish nets" in any capacity, and the authors delivered a variety of takes on it, everything from actual fish nets, to fishnet stockings, to fish.net. Amazing how many different things a single theme can lend itself to.

I snapped a couple more pictures with my oversized cocktail ring, now in the direction of the opportunistic trannie who had sold out his own boss for thirty pieces of silver. Adrenaline swept me like the spray of a self-tanner. It was my job to determine if my client's suspicions of thievery were legitimate, and now, thanks to a pinhole camera hidden in a chunk of blue agate, I could provide evidence that the answer was yes. All in all, very  Rockford Files. With better clothes.

A Moveable Feast is a collection of essays by the Nobel and Pulitzer winning writer, reflecting on his life in 1920's Paris. It written at the end of his life and was originally published a few years after his death. Hemingway had not finished it when he died and apparently over the years there has been a lot of discussion over the changes made from the original version, over which his fourth and final wife Mary had control. This "restored" edition was edited by Hemingway's grandson and purports to present the stories as Hemingway had originally intended, although from what I've read there is some dispute over whether or not another version was necessary, or whether it was due to continuing issues among Hemingway's heirs.

Regardless, Hemingway paints a remarkable portrait of the expatriate writing community in post-World War I Paris with little maudlin nostalgia for the good old days or for his bygone youth. The writing and talent he associated with in Paris were among the greatest that ever lived, including F. Scott Fitzgerald and his wife Zelda, James Joyce, Ezra Pound, Ford Madox Ford and Gertrude Stein. Fitzgerald in particular is examined closely in this collection; while he comes across as weak and at times childish, Hemingway considered him a good friend and had a great respect for his talent. His opinion of Zelda wasn't so nearly kind.

Hemingway and his wife Hadley lived a financially sparse life in Paris, but were happy during those days. During this period Hemingway stopped working as a journalist and was trying to make a living/career writing fiction. He paints a picture of a deeply satisfying life, despite his poverty and not having the benefit (as the reader does) of knowing his hard work and disciplined, spartan lifestyle will eventually pay off probably more than even he could have ever imagined.

I was constantly amazed at how gentle of a figure Hemingway seems in these essays and early years, versus the rugged, boozing "Papa" image he acquired in his post-Paris years. Reading the essays is like listening to someone you stumbled across in a small bar chatting fondly about a particularly cherished part of his life. There is little pretension, despite the fact that by the time this was written, Hemingway had become one of the most famous and successful writers of all time.

A lot of the essays seem to ramble in contrast to the tight, efficient prose that Hemingway was known for. At times it sounds like we're reading early drafts where he's just trying to get everything on paper to be edited down later. Still, it's a fascinating history of a haven that spawned some of the greatest writing of this century and a look at a charmed world of literary genius that will probably never exist again.

The "moveable feast" in the title refers to a Hemingway quote, "If you are lucky enough to have lived in Paris as a young man, then wherever you go for the rest of your life, it stays with you, for Paris is a moveable feast."

When I had finished the book I knew that no matter what Scott did, nor how preposterously he behaved, I must know it was like a sickness and be of any help I could to him and try to be a good friend. He had many good, good friends, more than anyone I knew. But I enlisted as one more, whether I could be of any use to him or not. If he could write a book as fine as  The Great Gatsby I was sure that he could write an even better one. I did not know Zelda yet, and so I did not know the terrible odds that were against him. But we were to find them out soon enough.

Posted by Melinda at 11:51 AM Labels: Books, Historic Hollywood