Food Network Star is back this Sunday

My new issue of Food Network Magazine arrived the other day with a couple of pages introducing the contestants who will battle for the chance to score a show of their own. The new season kicks off this Sunday night.

Out of all the years they've done this show, I've only watched a full season twice, a couple years ago when Lenny the cowboy took the crown, and the season before that when sweet-natured Southern girl Damaris Phillips won. Damaris' resulting show (Southern at Heart) just ended recently, while some of Lenny's previous bad boy behavior that somehow didn't come to light until after his win apparently scuttled his Food Network aspirations. The only real, lasting star to come out of 11 seasons of these competitions is Guy Fieri. That's not a great track record. Makes me wonder about their casting.

Anyway, the reason I mentioned this is that when I did watch full seasons, eventually I would kick myself for not blogging/recapping the show. So I'm going to do it this time around. Hopefully they got an interesting group for this go round.

Here's the new lineup and my uninformed take on the contestants before I've even had a chance to see them in action. Hey, Food Network Magazine provided the scorecard, so I blame them. In addition, I've heard internet chat that a lot of cooking show contestants make the rounds of different shows, so I also hit up imdb to find their prior credits. UPDATE: It turns out imdb isn't a good source for cooking show contestants, so I removed that info from this post. You can see why some of them look familiar here. 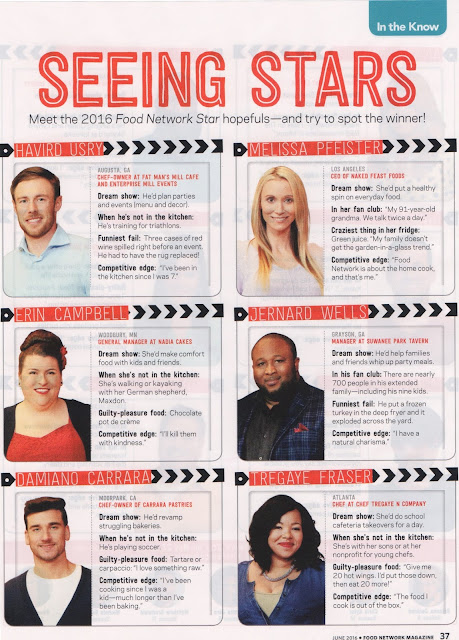 Havird Usry: Nothing about him really jumps out, which is a big handicap when you're trying to persuade someone to put you on television. Hey, he owns his own cafe and event planning company, so he'll get along just fine without a TV show.

Erin Campbell: She manages a cake shop, wants to do a comfort food show, has a German Shepherd (I'm jealous) and loves chocolate. I like her already. Don't ruin it for me, Erin.

Damiano Carrara: Basically his dream show is Bakery Rescue. I think Food Network already has a few rescue/revamp/rehab shows. But hey, I don't think they have a bakery one yet, so who knows.

Melissa Pfeister: Her competitive edge quote puts her up there with Erin. Except, Food Network used  to be about the home cook. Now it's every kind of competition imaginable, precocious kids, and actresses whose acting careers are no longer keeping them busy. More power to her if she can bring back the kind of show FN used  to be about.

Jernard Wells: Not sure how I feel about him. His enormous family will probably play huge here. But he put a frozen turkey in a deep fryer and it exploded, and he lists it as a "funniest" fail? An incident like that could have put a dent even in a family the size of his. As for his dream show, pretty much any show can do a party planning episode. I guess we'll see how his approach would set him apart (or not).

Tregaye Fraser: Jamie Oliver and South Park  already tried the school cafeteria makeover thing. I'm not saying it isn't a noble proposition, just that it's been done. Props to her though for her nonprofit work. 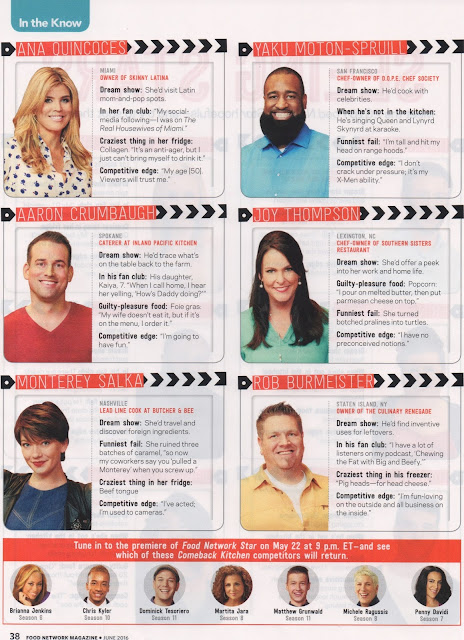 Ana Quincoces: I don't know if they photoshopped her picture, but she looks damn good for 50. But it seems like her dream show is basically a Latin Diners, Drive-ins and Dives, and again, it's been done.

Aaron Crumbaugh: Somebody online is going to hammer him for his foie gras love, you just know it. Probably PETA. It will be interesting to see how he flips the table-back-to-farm thing. That could be interesting if executed well.

Monterey Salka: Get someone to pay you to travel and eat? GENIUS. I like her already. And having acted does give her an edge. It's amazing how many contestants have great personalities and pitches, then just fall apart when they have to perform in front of the camera, because it's harder than it looks.

Yaku Moton-Spruill: Get someone to pay you to cook for celebrities? GENIUS. I'm wondering if the sense of humor he displays in this profile will come across on camera, because if so, he's going to be one of the ones to watch. That beard though...might be a problem. I'm already dreading the moment he's eliminated because of a hair in food. When I was in culinary school everyone had to have their hair pulled up or back, because you do not  want hair in the food. We couldn't have our nails polished either (not even gels and they're pretty indestructible) because again, stuff in food is bad, mmmkay?

Joy Thompson: Her show is a peek into her work and home life. Don't you already need to be famous for people to want to see that? Maybe that's why FN has so many celebrity shows - viewers think they're getting a peek into their personal lives. Sorry Joy, but everything about her profile screams first elimination. I marvel that she A) made it through what had to have been a heavily populated casting process, and B) the magazine's editor didn't suggest to her that she punch up her profile.

Rob Burmeister: Not sure what the market is for shows about leftovers. He might be great on camera, but the concept is a head-scratcher to me. On the other hand, it's a show I haven't seen before and it might really appeal to people with families to feed.

In addition, there's a batch of previously failed contestants currently battling for a spot. I'm assuming they were fan favorites that just had a bad week, because otherwise I can't imagine why you'd bring back prior losers. We'll see, I guess. I'll update this post when I find out which one it is. UPDATE: Martita Jara from Season 8 gets another shot at Food Network stardom.

You can learn a lot more than the magazine provided about the contestants here.