Update: I realized that I had included meeting Matt Coyle, my editor on LAst Resort, on this post. That didn't happen until Saturday, so I moved it to the Day 3 post. This is what happens when you recap several weeks after the fact. And also because Bouchercon is so overwhelming at times it turns into a blur.

Speaking of LAst Resort I ran into Rochelle Staub, President of Sisters in Crime Los Angeles, and she had spectacular news about who is writing the forward/introduction for the anthology. It hasn't been officially announced, so I don't want to say anything, but let's just say my jaw just about hit the floor. Definitely raises the book's profile. It also means that my story will be read by one of the most successful writers alive. So very, very cool. I asked her about the cover art and she told me it resembles the cover of Hotel California, which I think sounds awesome. LAst Resort will be released in early April 2017 and will be available for pre-order 6-8 weeks prior to that. 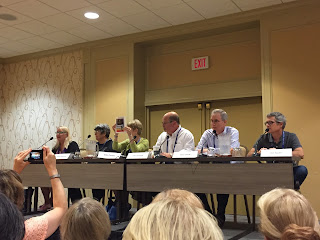 The panelists (with the exception of moderator Jones) have been in a writing/critique group for six years. They shared their experience and advice. 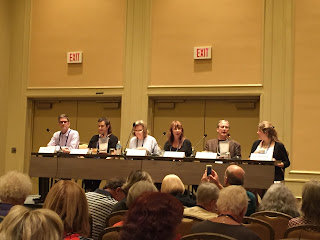 The worst thing they've done to their protagonists:
Wiley: He's divorced, but still in love with his ex-wife.
Black: Internal pain and loss of her parents and fiancee.
Benedict: Rape, loss of child.
MacNeal: Made her kill a man.
Abbott: Pregnant wife kidnapped, brother killed on video by terrorists.

And why:
Abbott: "I have pages to fill."
Benedict: Conflict moves the story forward. Bad things are going to happen, but revenge is sweet.
Wiley: Facing fears and overcoming them is important.
MacNeal: Likes the idea of ordinary people thrust into extraordinary circumstances. "What would you do?"
Black: Arc of her story is characters learning about themselves.

On the subject of going too far, or at least considering it and then pulling back:
Benedict: Her agent once told her that a decapitation in her story was okay, but rolling the head across the floor to the heroine was a bit much.
Black: Had a pregnant woman in an ambulance but couldn't decide if the baby was going to live. Her agent: "Yes, the baby will live."
Wiley: Wouldn't kill a dog for the longest time, and when he finally did, he made it a bad dog. Won't go after kids. Also feels there's a difference between something horrific happening onstage as opposed to offstage. 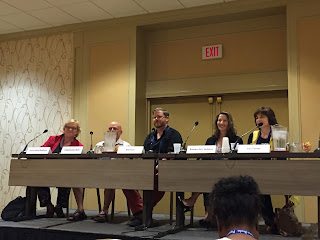 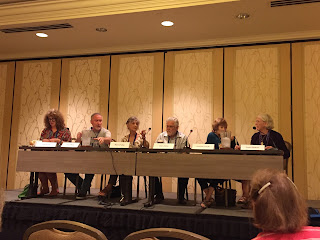 On their amateur sleuths:
Trauth: Sleuth is a restaurant manager - her hook is her organizational skills.
O'Mara: His protagonist is a New York City schoolteacher/former cop. O'Mara himself is a long-time NYC teacher and said that there isn't much difference between being a teacher or a cop in NYC. Had a cop in his classroom one day and at the end of her visit she asked him, "How do you do it?" His brother is also an NYC cop.
Oleksliw: Her sleuth is a photographer. Oleksliw uses her camera as a character.
Talley: Librarian - research is her strength.
Lehane: Sleuth is a Library Crime Fiction Coordinator.

Justifying the continuing involvement of an amateur sleuth in stories and series:
Trauth: Give protagonist an emotional imperative in relationship to the crime. A driven personality helps too.
Talley: Try to make her involvement logical (friend, family or self in danger or under suspicion).

Next up: Saturday panels!