#TrudeauEulogies - the most fun you'll have all day

Twitter may be willfully imploding but apparently it's still good for something. Case in point: today's Twitter Nation response to Justin Trudeau's statement on the death of Fidel Castro, better known as #TrudeauEulogies.

A little background: Justin Trudeau is the Prime Minister Pinhead of Canada. He's basically the white, Canadian version of Barack Obama. In other words, he's a terrorist enabling putz with a face that's just begging to be punched, and no matter how badly or often he fucks up his supporters still act like he's the Second Coming. Or something like that.

So while the freedom loving capitalist pigs of the world were enjoying their Black Friday deals, Cuban despot Fidel Castro finally shuffled off this mortal coil, at the age of 90 and way overdue. Which prompted Canada's Prime Village Idiot to issue this statement about the vile dictator who murdered thousands of his own countrymen, drove about a million more away from their homeland and turned Cuba from a popular destination to a third world shithole:

"Fidel Castro was a larger than life leader who served his people for almost half a century. A legendary revolutionary and orator, Mr. Castro made significant improvements to the education and healthcare of his island nation.

While a controversial figure, both Mr. Castro's supporters and detractors recognized his tremendous dedication and love for the Cuban people who had a deep and lasting affection for 'el Comandante'."

Dude is seriously giving our lame duck Prez a run for his money in the Utterly Clueless and Blithe Stupidity Departments. Guess how Cuban immigrants in Miami are mourning el Comandante? They're celebrating in the streets. They've been waiting decades for this POS to kick the bucket. A lot of Trudeau's fellow hosers aren't too happy about the statement either.

On the bright side, there's always the witty and hilarious denizens of Twitter to mock where mocking is most needed. That brings us back to #TrudeauEulogies: 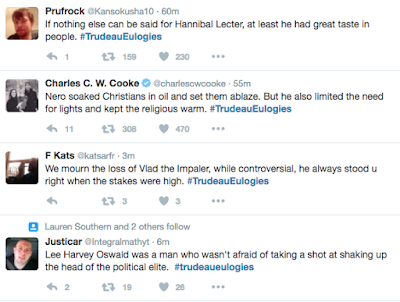 I swear Twitter hasn't been this much fun since #AttackWatch.

Posted by Melinda at 12:32 PM
Labels: In the News, Jerks, LOL, Oh Canada, State of the Union