Our Friday morning surprise was a demonstration of how law enforcement approaches an officer down situation. In this scenario, an officer had pulled over a car whose driver opened fire on him, then ran. What we learned:


Horsey Cops!!!
No demo, but it was nice just to be up close to horses again. This is how much of a horse-crazy girl I still am: I know the horses' names, but neglected to get the names of the officers.

One of the things I was surprised about was how young both horses are - 7 and 9. For you non-horse people, that makes them comparable to people in their early and late twenties. Horses are what I refer to as "live and learn" animals and tend to mellow out as they age. I expected older horses to be used for police work. One of the officers told me that they have a great trainer who does a terrific job of getting the horses accustomed to things they might come across on duty that could spook them.

Say hello to Officers Cooper and Cole! (and their partners): 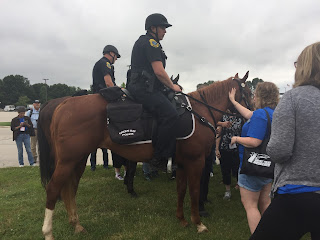 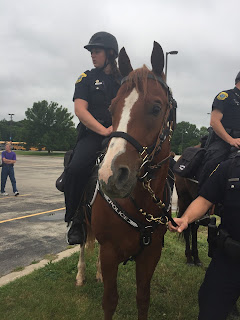 Hensen's background not only includes working with law enforcement in the field of animal abuse, but she spent three years as an elephant trainer. No joke.

She also played a horrific 911 tape of a little girl identified only as "Lisa" who called because her mother's boyfriend was beating her (the mother). There was also a younger sibling in the house and at one point in the call Lisa screamed, "He's got the baby!" Karen assured us that Lisa and her family were rescued and that she grew up to work with domestic violence victims. We needed to hear that. It's not the first 911 tape I've heard, but it was probably the worst. You see and hear all kinds of crazy stuff at WPA, but this was really traumatic. I don't know how 911 operators handle these calls, but I'm glad they do. 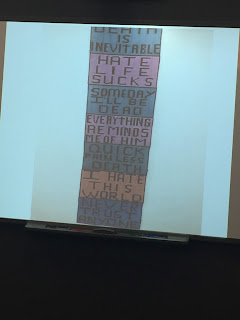