It means that someone is going to suffer the humiliation of being the first cancellation of the season! And by someone, I mean one of the new network shows.

I stumbled across a terrific website today that I'm boggled I haven't seen before: Television Obscurities, devoted to shows that crashed and burned upon launch, many of which are largely forgotten today. The site has a poll where you can vote on your choice for the first cancellation of the new season. 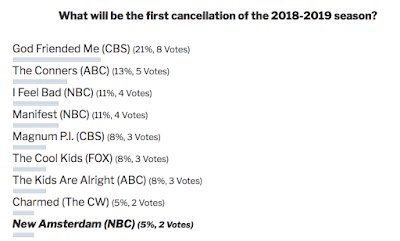 I was surprised to have been only the second person to cast a vote for New Amsterdam. I'm all for helping people, but I've found the over-the-top do-gooding in their spots - which have been in heavy rotation - to be cringe-worthy, and I read a review of the pilot today that basically confirmed my reaction.

I was surprised that Manifest rated so high in the poll. NBC has been touting it as the most anticipated new drama of the season and I don't disagree with them. I did see the pilot last night and despite a bunch of less than enthusiastic reviews, was not disappointed. I especially did not see that ending coming. I actually think this will be one of the most successful new shows.

Also not surprised by the Magnum P.I. votes, although I don't see CBS being willing to cancel it early on even if the ratings tank, if for no other reason than to save face on what seemed to be a reboot no one was clamoring for but the network seemed hell-bent on making happen.

Think you know the first show to die a horrible death this season? Get on over to Television Obscurities and cast your vote!

Updated 9/26/18: Whoops! Looks like I was wrong about New Amsterdam!