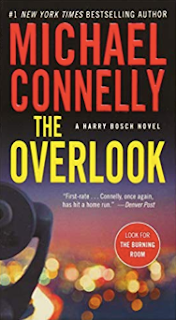 For me this one was hard to get into. I had to give it a couple of tries before I was able to stick with it, which surprised me given my recent obsession with Bosch/Connelly audiobooks.

Bosch gets called out to a murder scene at the Mulholland Overlook in the Hollywood Hills, and what looks like a simple execution balloons into a possible terrorism case when it's discovered that the victim is a doctor with access to a catastrophically lethal amount of cesium, a highly controlled radioactive substance used to treat certain types of cancer, and which has gone missing. The FBI shows up of course, and this means even more fun for Bosch, who now has to tangle with the Feds in addition to his usual battles with his own department.

Sticking with this story really paid off at the end, when Bosch discovers that the case isn't anything like what he and the Feds believed it to be. It was a terrific reveal, with an additional shocking turn, and made me really glad I stuck with it. Again, I didn't see that ending coming at all.

Bosch and the Federal agents stood silently. There was an almost palpable sense of dread hanging in the air in the oncology lab. They had just confirmed that Stanley Kent took thirty-two capsules of cesium from the safe at St. Agatha's and then most likely turned them over to persons unknown. Those persons unknown had then executed him up on the Mulholland Overlook.

Update: Michael Connelly has announced that Season 6 of Bosch, which has just gone into production, will be based on The Overlook.