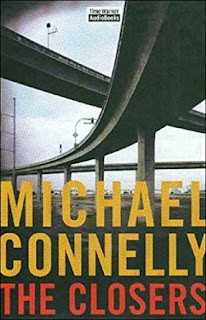 The Closers by Michael Connelly (audiobook read by Len Cariou)

This was Bosch book #11 (from 2005) and Connelly is now up to Bosch #21, so this one is a bit of a throwback. No matter - it's vintage Bosch and vintage Connelly, and one of my favorite Bosch books so far.

Detective Harry Bosch is returning to the LAPD (in the Open/Unsolved Unit, specifically) after three miserable years as a retiree. He and his old partner Kiz Rider have been reunited by the new Chief of Police, and are sent right out of the gate on a 17 year old unsolved murder investigation reactivated after DNA on the murder weapon has come back with a match to a career petty criminal.

The cold case is the murder of Chatsworth teenager Rebecca Verloren, found shot to death near her home in what initially appears to be a poorly staged suicide. Racial issues, elite schools, red herrings, LAPD politics, and Bosch's nemesis Irvin Irving all play roles in the investigation. I'm also not usually a fan of my protagonist in an undercover role - for some reason it's always something that makes me uncomfortable - but Bosch pulls off a gem of an undercover performance staged to supplement a planted newspaper story intended to flush out Rebecca's killers.

As usual with Connelly, even when the crime has been solved and the story seems over, it goes on for a few more beats. Especially satisfying - besides Bosch seeing justice finally done for a teen girl and the parents destroyed by the murder of their only child - was the scene where the Chief unceremoniously "retires" Irving without warning and in front of an audience.

The plan translated into six pairs of detectives working twelve hour shifts. The shifts changed at six a.m. and six p.m. Since it was their case, Bosch and Rider got first choice of shifts, and had elected to cover Mackey at six p.m. This meant working through the night, but it was Bosch's hunch that if Mackey made a move or a call, it would occur in the evening, and Bosch wanted to be there when it happened.