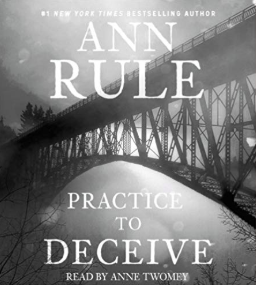 I first learned about the murder of Russel Douglas, the nearly decade-long investigation into his killing, and the strange cast of characters involved in the case on a true crime show. When I started digging around for more information I discovered that legendary true crime author Ann Rule had written a book about it and decided to check it out. And I'm glad I did, because there was so much more to this case that couldn't be jammed into a one hour show. And sadly, one of the many things that makes the case so bizarre is that eventually it's almost as if Douglas becomes a mere footnote in his own homicide.

Douglas was found shot to death in his car in a secluded neighborhood on Whidbey Island, Washington, the day after Christmas in 2003. He had been on the island visiting his estranged wife Brenna and their two children for the holidays.

The case was weird from the start. Brenna was strangely unemotional and seemed unsurprised when detectives informed her of Russel's murder. She also wasn't shy about trash-talking him when questioned by the police, freely dishing about his infidelities, extreme sexual practices, and lack of friends. But her alibi checked out and investigators were never able to connect her to the murder, although they always suspected she was involved.

As time went by police feared the case would never be solved. They assumed that the killer had probably tossed the gun into Puget Sound and that it would never be found. Then the gun miraculously turned up in the possession of a former cop who had been holding it at the request of a friend named James Huden, a former resident of Whidbey Island who had relocated to Florida. They also eventually heard from Bill Hill, a friend of Huden's in Florida who claimed that Jim had confessed the murder to him. Investigators headed to Florida to question Huden and although they did talk to him, he disappeared shortly thereafter and would remain in the wind for years.

The investigation also revealed the long-distance affair between Huden and Peggy Sue Thomas, also a former Whidbey resident and a close friend of Brenna Douglas. At the time of the murder the beautiful, charming, and statuesque Peggy Sue was working as a limo driver in Las Vegas, and she and Huden had visited Whidbey Island over the holidays, although both denied any knowledge of or involvement in the crime.

Nearly ten years after Russel's death, Huden was finally located in Mexico, extradited, and convicted of the murder. Peggy Sue was also charged with murder and despite never admitting to any wrongdoing eventually accepted a plea deal on a lesser charge. Despite considering the crime as a murder for hire deal between Brenna, Peggy Sue and Huden, police were never able to turn up any evidence to prove that theory and were unable to charge Brenna with a crime. The still besotted Huden refused to implicate Peggy, who the authorities believed had lured Russel to the remote location by telling him she wanted to give him a Christmas present to deliver to Brenna, knowing that Huden would be laying in wait. Ultimately, while the judge threw the book at Huden, sentencing him to 80 years, Peggy Sue's deal only gave her four years.

One of the things that the program didn't have time to get into - and which Rule gives a large portion of the book to - is the tragedy-marred story of Peggy Sue's large family. She was the daughter of Jimmie Stackhouse and his second wife, Doris. Jimmie's first wife, Mary Ellen, was brutally murdered in their California home one night by a disturbed teenage neighbor while their six children slept. Jimmie was out of town for Navy training and so Mary Ellen's body was discovered by their young children. The Navy transferred Jimmie back to Whidbey Island where he met Doris, a divorcee with two daughters who started out babysitting the Stackhouse kids before becoming their stepmother. Peggy Sue was the only child of both Doris and Jimmie, and grew up as the indulged baby of the family. When Jimmie and Doris's marriage ended years later, he married for the third time to a woman named Terry, who had three children from a prior marriage, bringing the total number of offspring in Jimmie's life to a full dozen.

In addition to Mary Ellen's murder, the family would suffer more untimely deaths over the years. Robby, one of her sons, was nearly killed when he got caught under the wheels of a school bus, but recovered from his injuries, only to be shot to death at a party as a young adult. Brenda, also one of Mary Ellen's, committed suicide in her early fifties. Traumatized by her mother's murder, Brenda suffered throughout her life, but finally hit rock bottom when police asked her to testify to incriminating statements made by Peggy Sue. She died just before the trial would have started and before Peggy accepted her deal. In addition, one of Terry's children would eventually die in a car crash. And it didn't stop there. In doing even more research on the story, I learned that Jimmie Stackhouse died of a self-inflicted gunshot wound last October.

Another aspect of Peggy Sue's life that Rule fleshes out in the book is her brief third marriage. Twice-divorced by the time of Russel's murder, Peggy Sue met millionaire horse breeder Mark Allen when he was a passenger in her limo. A quick courtship ensued before the couple married at Allen's ranch in New Mexico. Peggy Sue brought along her two daughters and her mother Doris but as much as the generous Allen bent over backwards to accommodate them and indulge Peggy, she was unhappy with ranch life. She was particularly dismissive of Allen's love for his prized thoroughbred racehorses, which she had zero interest in.

The marriage quickly soured. Despite Allen's attempts to make her happy, Peggy Sue spent most of her time in New Mexico drinking and squirreling away his money and items purchased with his money, including a houseboat. The marriage was over within a year. The following year one of Allen's horses, Mine That Bird, pulled off one of the biggest upsets in the history of the Kentucky Derby when he won the race despite going off at odds of 50 to 1. Rule can't help but gloat over the missed golden opportunity to have reveled in the attention and glamour that Peggy Sue would have enjoyed as part of Mine That Bird's Cinderella story, if only she had attempted to be a decent wife to Allen.

The audiobook was read beautifully by Anne Twomey, and the story was so compelling that the first thing I did when I finished listening to it was to start all over again. Props to Rule for taking such a tangled tale and finding a way to tell it all in a way that never makes the reader/listener feel lost or confused.

Creepy factoid: Like Peggy Sue, author Rule's maiden name is Stackhouse. In the book, she indicates that they are not related.

In the spring of 2009, Mark's horse Mine That Bird won the Kentucky Derby and was headed for the Triple Crown. Bird's winning run was the second largest upset in the 185 year history of the Kentucky Derby. Had she stayed with Allen, Peggy Sue would certainly have enjoyed the Derby, the fancy clothes and ridiculous hats, mint juleps, and most of all being in the winner's circle as the wife of a winning owner. It would have been almost like reliving her Ms. Washington days, not to mention the purse that went with the win.

Three books were written about Mine That Bird's courage, and a theatrical movie is still rumored to be in the works. How Peggy Sue would have thrived in the exciting and inspiring Derby outcome. But she had burned those bridges.

And a couple of final notes: Mine That Bird was not in fact headed for the Triple Crown. He finished second in the Preakness and third in the Belmont; in fact he never won another race after the Kentucky Derby. And a theatrical film, 50 to 1, was made and released in 2014. I've seen it, it's hokey as hell but gets the story across. One can only reimagine it with Peggy Sue in the picture (literally and figuratively) as Allen's faithful wife, standing by his side through all the trials and tribulations of getting Bird to Churchill Downs. I wonder who would have been cast in her role.