Mom's Birthday, and the beauty of this world even in death

My Mom would have been 78 years old today.

The Brother and I aren't big on visiting grave sites. On my side of the family (he's my half-brother from Mom's marriage to my Stepdad) nobody is buried. Everyone is cremated with their ashes spread, so there were never any graves to visit. In fact, when it's my time I want my ashes spread in the ocean. We spread my Dad's ashes in the sea off his beloved Kailua-Kona, Hawaii. For me, anywhere there is sea, sand, and seashells will do.

On The Brother's side, everyone gets buried. But that doesn't seem to translate into a lot of visits to the grave sites. It's just important that they're buried.

When Mom died I had a pretty good idea of what she would want: cremation, no burial, not a lot of fuss, and not a lot of money spent. But since I assumed that like most of the women in our family she would live into her 90's, we never discussed it. So no plans were ever made, although she would joke about me sneaky-spreading her ashes around The Arboretum. Spoiler alert: I failed to do that.

Which meant that when The Brother and I suddenly had to figure out what to do when Mom died unexpectedly in March 2018, we kind of met in the middle. She would be cremated, but she would also be buried. The fact that we fortuitously ended up at the same place where my Godfather Jack - a friend of my parents since high school who was like a brother to Mom - was also buried, helped make the decision easier, especially when they were able to give us a plot for her within eyesight of Uncle Jack.

This year Mom's birthday fell on a Friday and since the cemetery picks up flowers on Thursday, we thought this would be a great day to visit her grave and leave her some flowers that would be there for a while. 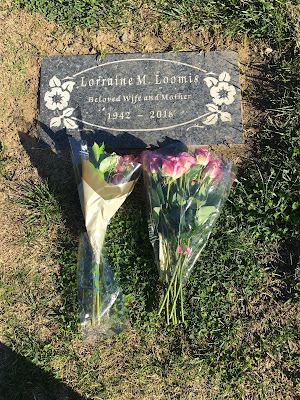 There were two other things that blew us away today at the cemetery. The first was the Christmas decorations. Apparently the cemetery suspends cleanups during the holiday season, so the place was like a Christmas wonderland. I had no idea they leave the decorations up, but I'm glad they do because it's just gorgeous! 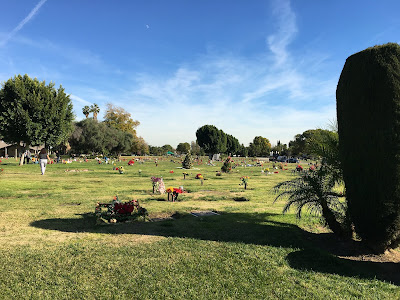 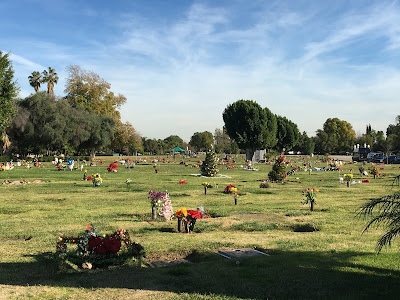 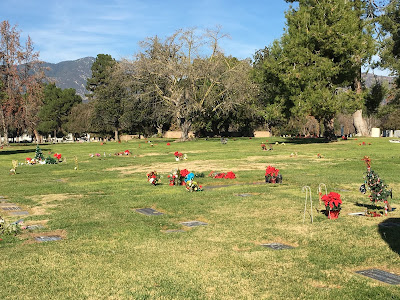 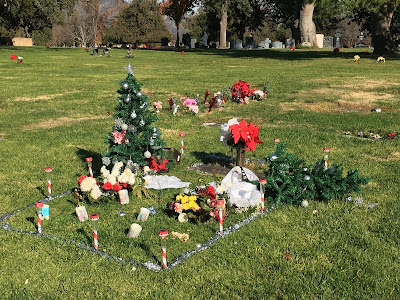 The pictures don't do it justice. It was just dazzling. Some of the grave sites had decorated trees! Seeing it, you would never see this graveyard as a place of death, but as a place of life, celebration, and joy.

On top of that, as we were leaving, we were caught up in traffic for a funeral that was breaking up with a huge number of attendees. The Brother and I were fascinated by the idea of someone who brought out a crowd like that. A sign we passed on the way out identified the deceased as Ruby Jewel Ball. I'm thinking family matriarch. There were so many families - I spotted at least two with little girls in matching dresses, like Mom used to do with my sister and I back in the day - and lots of what looked like happiness and fellowship. No one was crying, but there was a lot of interaction, love, and comforting each other. Ruby must have been something.

It's crazy how fast the time has gone by. In just a couple months it will be the second anniversary of Mom's death. It will be nine years in May for my Dad, which is even crazier. There are so many things I wish for in this life, and often one of them is that time would just slow down.

Earlier today I was wondering how long I'll feel compelled to recognize the anniversaries on the blog. Part of me would kind of like to let it go and stop obsessing over it, part of me feels it would be disrespectful. I guess I'll find out in early March.