Kirk Douglas, one of the few remaining stars from the Golden Age of Hollywood, died today at the age of 103. 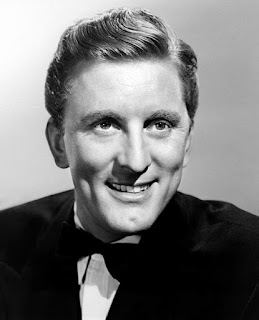 I was just watching A Letter to Three Wives the other night. It was the film Joseph Mankewicz wrote and directed prior to All About Eve (he received Oscars for Best Director and Best Screenplay for both films in consecutive years, the only person to ever pull this off). While not remembered as a classic like Eve, it's a great film and one of my all-time favorites.

A Letter to Three Wives was only Douglas's seventh film in a career that would go on to last over sixty years and his trademark vitality and energy were on full display even in a supporting role. Douglas would score three Oscar nominations for Best Actor, eventually receiving an honorary award in 1996.

While it's hard to feel bad for someone who lived over 100 years, it's still a loss to his family and friends and for fans of old Hollywood. He had a hell of a life and it's always sad to see something that great come to an end.

Pic from A Letter to Three Wives snicked from imdb.