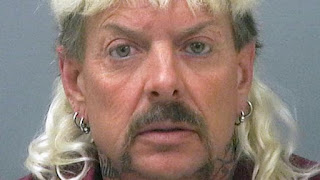 A number of actors have volunteered to play Joe Exotic ever since Netflix unleashed Tiger King on an unsuspecting world. Joe himself reportedly suggested either Brad Pitt (uh-huh) or David Spade, although Spade wasn't interested. My favorite suggestion was Edward Norton. But the winner has been announced and Nicolas Cage has seemingly come out of nowhere to win the big race.

From the Variety article:

The eight-episode series is being produced by Imagine Television Studios and CBS Television Studios. It will be taken to market in the coming days. It is based on the Texas Monthly article "Joe Exotic: A Dark Journey Into the World of a Man Gone Wild,' by Leif Reigstad.

Can you say, "Bidding war"? If I ran a network I'd just give them a blank check. This will be one of the most anticipated miniseries ever.

The story centers around Joe Schreibvogel, a.k.a Joe Exotic, an eccentric, exotic zookeeper in Oklahoma who fights to keep his park even at the risk of losing his sanity. The series will live in the lion's den with Joe, explore how he became Joe Exotic, and how he lost himself to a character of his own creation.

I do wonder if they'll address some of the darker Joe Exotic stories that have swirled around but weren't included in the Netflix show. The Texas Monthly article is pretty much straightforward reporting of Joe's journey from young animal lover to federal felon. It doesn't paint him as the lovable, larger-than-life eccentric wronged by competitors and the legal system that we see in Tiger King, so I'm really hoping to see the story from a different angle. If you're still buying into the whole "Pardon Joe Exotic" thing, you should check out the aftershow episode hosted by Joel McHale, in which he interviews figures from the series. Almost every single one of them had unflattering things to say about Joe and believe that he belongs in prison and should stay there.

Cage is going to go nuts with this role. He'll be chowing down on scenery like Joe's big cats chowed down on expired Walmart meat. He should probably clear out some space next to his Oscar for the inevitable Emmy.

I haven't looked forward to a show this much since I can't remember.

Posted by Melinda at 6:00 AM
Labels: Crime, Film, In the News, Stranger Than Fiction, Television