Recent reading: "The Castle on Sunset" 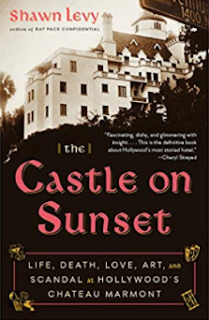 This is a wonderful, amazingly comprehensive look at the star-studded history of the legendary Chateau Marmont, the gorgeous, historic hotel that towers over the east end of the Sunset Strip in West Hollywood.

Levy has done his homework. The book covers the entirety of the hotel's life, beginning in 1926, when Fred Horowitz bought a then-remote piece of property west of Hollywood on which he envisioned building a luxury apartment building whose design was inspired by the Chateau d'Amboise in the Loire valley of France. The Chateau opened in early 1929. Later that year, the stock market crashed and the Great Depression began. Three years after the crash, Horowitz sold the Chateau to Albert E. Smith, co-founder of the Vitagraph movie studio and the parade of owners - and eras - began.

Hollywood embraced the hotel over the decades. It has served the industry as a home for some of its most celebrated, giving them a private, inspirational place to create, a then-inexpensive first home for those new to town who would go on to become legends, a discreet place to carry on affairs, as well as a place to encamp when the dissolution of one's marriage required a quick, discreet new address, and eventually a Hollywood hotspot.

There are tales of creative genius, scandalous behavior, and the hotel's obsession with protecting its denizens and their antics from the media and masses. As the building deteriorated over a certain period of its life, it's ability to keep the secrets of its tenants and visitors earned it a surprising loyalty from people who could afford to stay at more elegant and well-kept places. In fact, a large contingent of its residents embraced the hotel's descent into shabbiness, willing to tolerate patchwork and sometimes non-existent repairs, maintenance, and updates because they loved the life that the Chateau's walls protected from the outside world. Actress Jill Clayburgh once implored a reporter not to praise the Chateau in print: "Oh, don't mention the hotel! Then all the tourists will come. If you must say something about this place, say it's terrible. Please say it's terrible!" There was something about life at the Chateau Marmont that couldn't be found anywhere else, and those who lived in it and loved it were willing to put up with a lot to keep that aspect of it intact.

The book of course covers the infamous drug overdose death of John Belushi, and it's an expectedly depressing story. But as much as that would seem to be the obvious chapter to pull a quote from, I had to go with these paragraphs from the last few pages of the book, because it really sums up the life - past and present - of a place that touched so many who lived within its walls, so many of whom were creatives and for whom the Chateau Marmont was such a large part of their life, work, and art.

You can't fully tell the history of Hollywood movies or the Sunset Strip without making reference to it; it sits inside a pair of stories in which, technically, as an inanimate edifice of concrete, steel, wood, and glass, it has taken no part. Stately, steady, solid, redoubtable, it presides over its setting - literal and figurative - with an air of patient boredom. All the sensations that have transpired within and without it, all the zealots and visionaries and schemers and charlatans who've inhabited it, all the deals - of all sorts - that have been sparked or completed or scuttled within its confines: It's a saga of weight and drama and impact befitting an entity of far longer and more storied history.

Chateau Marmont isn't as old as Hollywood or as large or as influential. It doesn't define the Sunset Strip or symbolize it or embody its greatest legends. But it is intrinsic to the stories of both those institutions.

If you have any interest in historic Hollywood - and especially if you're as crazy about it as I am - you need to read this book. And now I need to add staying at the Chateau Marmont to my bucket list.