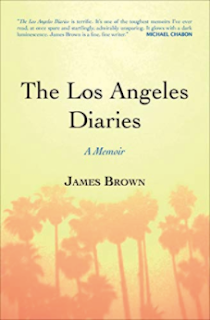 The Los Angeles Diaries: A Memoir by James Brown

Brown's harrowing background includes a highly dysfunctional mother who committed murder and secretly bankrupted her family, as well as two older siblings who suffered from alcohol and drug issues, as did Brown. The difference between Brown and his siblings is that they eventually succumbed to their demons, both dying by suicide. Despite living a lifestyle that should have killed him as well, Brown eventually came to the realization that he had to change, although it took years, the horrific deaths of his brother and sister, a shattered marriage, and countless lost professional opportunities.

The Los Angeles Diaries is a collection of brutally honest essays detailing various moments in Brown's life, beginning when he was five years old and his mother decided to set fire to an apartment building, killing an elderly resident, then treated him to a weekend in San Francisco. The police eventually caught up with her thanks to an eyewitness, who unfortunately was elderly and ultimately not considered someone strong enough to go to court with. This didn't spare Brown's mother a prison term, as it was then discovered that she had been secretly selling off properties her hard-working husband had accumulated. She bankrupted the family and did time for tax evasion due to not paying taxes on the money she'd made from the sales.

Brown's older brother Barry had a knack for performing and once out of prison Mom pushed his showbiz career, taking the kids to Hollywood after her marriage ended following her imprisonment. Despite his fondness for booze and the Hollywood lifestyle, Barry racked up an impressive list of credits before shooting himself to death at age 27.

The family's middle sibling, Marilyn, was an aspiring actress whose career never took off. She got pregnant and married young, but her addictions to alcohol and drugs eventually got the better of her. She made it to her mid-forties before leaping off a bridge into the cement Los Angeles Riverbed.

I found this book in a strange way. I had Netflixed the first season of Rod Serling's Night Gallery and Barry Brown was in an episode. For some reason I looked him up on imdb and not only discovered his tragic family history, but The Los Angeles Diaries as well.

James Brown became a successful writer and writing professor, despite his own issues. He eventually cleaned up thanks to his second wife. I thought it was sweet that in his acknowledgements he thanked his first wife, the mother of his three sons, noting that she had been put through more than she deserved.

The Los Angeles Diaries became the first of a trilogy of Brown's experiences with addiction and sobriety. The most recent was just released in March. You can find more info on Brown's website.

Then my mind drifts to Tito and the things we stole. The eight-tracks come from cars parked around the neighborhood. The TV and stereo belong to someone who lives in a groundfloor apartment across the street. The big stuff - the Selectrics, the Dictaphones and the adding machines - come from an office building in North Hollywood. I think about the good part of stealing, the adrenaline rush, the fear of being caught and the exhilaration of getting away with it. And the money, all the easy money. But when I close my eyes I see the man who lives in that apartment coming home after a long day's work and finding his place ransacked. I picture the people who work in the office building in North Hollywood and the look on their faces when they discover the same scenario.