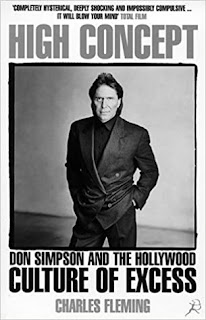 High Concept: Don Simpson and the Hollywood Culture of Excess
by Charles Fleming

Don Simpson was one of the most successful movie producers of the 1980's and 1990's. Simpson and Jerry Bruckheimer, his producing partner, were responsible for wildly popular films including Flashdance, Beverly Hills Cop, Top Gun, Bad Boys, Crimson Tide and The Rock, scoring with what became known as "high concept" films. Despised by most critics but loved by paying audiences, this approach propelled Simpson to the highest level of Hollywood. But his success also allowed him to indulge in behavior that was incredibly self-destructive and that would kill him at the age of fifty-two.

Simpson's demons are all the more sad because of his immense talent. He was a scholar of the golden era of Hollywood. He had a gift for analyzing scripts, an instinct for what audiences wanted to both see and feel, and a keen grasp of pop culture. For Flashdance, he utilized the then-fledgling MTV to help promote the film, which spawned two hits songs. It was a win-win - MTV needed the content and every time a Flashdance video aired on the channel it was a free ad for the movie.

Despite his hit-making gifts, Simpson also embodied the worst cliches of Hollywood power players. He once greeted a reporter by asking him what time it was, then followed that with, "Four o'clock. You know what I like to do at four o'clock? I like to pour myself a big drink, lay out a few lines and abuse a screenwriter. Have a seat."  The reporter sat and watched Simpson do just that. In that order.

Simpson's alcohol use almost derailed his career when he was only in his thirties. A successful Paramount executive at the time, his drinking became such an issue with his superiors that they fired him, offering the traditional producer deal in return for him leaving quietly. That's when he hooked up with Bruckheimer and the box-office bonanza commenced.

Simpson also developed an affinity for hookers. He forged relationships with Madame Alex and Heidi Fleiss, two of the most notorious madams in Los Angeles. His drug and alcohol use became legendary even by Hollywood standards. The list of prescriptions he held at the time of his death is staggering - roughly twenty different drugs. One post-mortem investigation found that his monthly expenditure for prescription drugs was over $60,000...and that's in mid-nineties dollars. It's almost as if his death at a relatively young age wasn't so much a tragedy, but a miracle that he survived that long.

On top of his substance intake, Simpson also struggled with internal demons and insecurities that manifested in weight issues and multiple, grotesque plastic surgeries. Among these was having fat injected into his penis to increase its size, and having time-release testosterone implants in his buttocks to increase his sex drive and energy level. That last one backfired on the Days of Thunder set when the time-release aspect failed, "flooding his system with very high doses of the aggression-inducing hormone." Simpson flew into a rage while arguing with Bruckheimer, reportedly ripping a door off a production vehicle.

Fleming does a fantastic job of recreating the Hollywood of the eighties and nineties, with its big name movers and shakers, over-the-top lifestyles, the intertwined relationships, and the toll all of this took on those who lived it. And no one represented that lifestyle, era, or paid the price like Simpson.

One thing that I did find darkly humorous were statements made in the aftermath of the end of the Simpson/Bruckheimer partnership. No longer able to deal with the excesses and resulting craziness, and hoping some tough love would shock Simpson into dealing with his addictions, Bruckheimer ended their professional union in 1995. Almost everyone seemed convinced that Simpson could be successful on his own, but that Bruckheimer wouldn't. As it turned out Simpson would be dead within months, and as far as Bruckheimer is concerned...well, I think we all know how wrong the naysayers were about his post-Don Simpson accomplishments.

What Bruckheimer did not say, but what close friends and employees knew, was that he had simply had enough. Since the peak of their high-concept high in the mid-1980's, Simpson had been on an almost nonstop bender, a perpetual attempt to live his life at the very edge of every extreme. It had worn badly on his health and on his ability to function as a producer. It had also worn badly on Bruckheimer's patience.