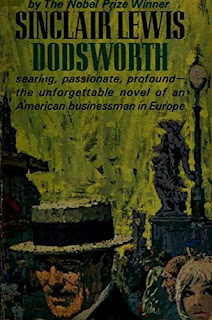 I'd seen the excellent film version of Dodsworth in the past, but I didn't really get hooked on it until TCM ran it recently and I rewatched it a couple of times and got really caught up in the story and characters.

Lewis's Elmer Gantry is one of my two all-time favorite novels (Edith Wharton's The House of Mirth is the other) and I'd also read his Babbitt years ago, but I'd never read Dodsworth. And I have to admit I'm glad I saw the film first because as much as I love the story, parts of the book can be exhausting, with a lot of long-winded conversations. The film version also tightens up the amount of traveling, getting more quickly into the increasing issues between the uncomplicated, down-to-earth Sam and his increasingly frivolous and wayward wife Fran.

The 1929 novel was adapted for the stage in 1934, and the film version was released in 1936. According to the TCM introduction, Walter Huston, who played Sam on stage, had it written into his contract that he would also get the role in the film. Good call, because he's excellent (as are the rest of the cast, which includes Mary Astor and Ruth Chatterton).

The story revolves around Sam Dodsworth, who has sold his successful automobile manufacturing company and retired at the relatively young age of fifty. This decision has been heavily influenced by his wife, Fran (Chatterton). With their children (child in the movie) grown and having put in her time as a wife and member of a society she has become to feel is dull and beneath her, Fran is eager to head to Europe to begin a new life as a cultured expatriate, while Sam is under the impression that it's an extended vacation that will end up with their return home.

Fran, however, sees herself as having more in common with the European life she considers far superior to what she left behind and her snobbery begins to drive a wedge between them. The devoted Sam wavers between wanting to indulge Fran and wearying of her pretension. Another issue is her flirtations; Fran is a few years younger than Sam and can pass for even younger, and we learn of her fear of getting old. She enjoys the attention she receives from the European men they meet, while Sam vacillates between knowing she needs to feel desirable and being offended by her making a spectacle of herself, and making him feel unsophisticated and inadequate. In both the novel and film there's a stunning scene where Fran learns that she and Sam have just become grandparents thanks to their daughter Emily. Fran is at first ecstatic at the news, then horrified by the idea of her latest young admirer finding out she's a grandmother. The additional awkward scene from the film where she claims to be celebrating her thirty-fifth birthday (not fooling anyone) does not appear in the book.

Eventually one of Fran's admiring young men, Count Kurt von Obersdorf, becomes so smitten that he proposes marriage. Fran has come to view Sam as boring and a barrier to her living the sophisticated European lifestyle she imagines as her true self and her right, and after yet another argument she finally drops the axe on their marriage.

Among the many people Sam and Fran meet during their travels is the American widow Edith Cortwright (Astor). As the Dodsworth marriage is shattered by Fran's increasing pretension and flirtations, Edith is a stark contrast - down-to-earth, without Fran's petulant shallowness or need for attention. While waiting for his divorce to go through, Sam wanders Europe and ends up running into Edith again in Italy. They click and it seems as though Sam has found someone who can appreciate and encourage him, the opposite of what he had been receiving from Fran.

Then Sam gets a frantic call from Fran. Before asking for her hand, Obersdorf failed to run the idea past his elderly, imperious mother. Recognizing that Fran is much older than Kurt, the countess brutally torpedoes the idea of marriage, pointing out that Kurt deserves to have a wife who can give him children and describing Fran as "the older wife of a younger man." Unfortunately for Fran, Kurt is devoted to his mother and won't marry without her blessing, suggesting they wait to see if mom comes around. Fran is livid and humiliated that he won't stand up for her and when Kurt departs with his mother, Fran calls Sam in a panic, begging him to come get her and take her home. Sam reluctantly tells Edith he has to take care of his wife and he departs, leaving Edith shattered.

On the ship back to America it becomes clear that Fran has learned nothing from her experiences. She seems oblivious to what she has put Sam through, much less imagining that he may have sacrificed something for her. When her unrepentant snobbery rears its ugly head yet again, Sam realizes nothing is going to change. He leaves Fran and returns to Edith.

In addition to tightening up the long florid speeches, the film (and I'm assuming the play, as they were both adapted by Sidney Howard) did a better job of making Sam more of a man who knows who he is and isn't going to put on airs. In the novel he caved to Fran so frequently and seemed so beset by self-doubts despite his accomplishments that I sometimes found it frustrating that he wouldn't stand up to her. Granted, as a drama queen Fran was a formidable opponent, but it got old after a while. I much prefer the film version. I'd also love to see it on stage, although I'm not sure how much of a candidate it is for a revival.

The film version of Dodsworth received seven Academy Award nominations, including Best Picture, Best Screenplay for Howard, Best Director for William Wyler (the first of many), Best Actor for Huston, and Best Supporting Actress for Maria Ouspenskaya, who appeared in all of one scene as Kurt's mother. It won for Best Art Direction.

"I'm delighted. Of course. Dear Emily! She'll be so happy. But Sam, don't you realize that Kurt - oh, I don't mean Kurt individually of course, I mean all our friends in Europe - They think of me as young. Young! And I am, oh, I am. And if they know I'm a grandmother - God! A grandmother! Oh Sam, can't you see? It's horrible! It's the end, for me! Oh, please, please, please try to understand! Think! I was so young when I married. It isn't fair for me to be a grandmother now, at under forty." With swiftness he calculated that Fran was now forty-three. "A grandmother! Lace caps and knitting and rheumatism! Oh, please try to understand! It isn't that I'm not utterly happy for Emily's sake, but - I have my own life, too! You mustn't tell Kurt!! Ever!"