Recent reading: "Deconstructing The Rat Pack: Joey, The Mob, and The Summit" 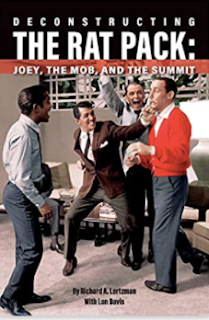 Deconstructing The Rat Pack: Joey, The Mob, and The Summit
by Richard A. Lertzman with Lon Davis
I came about this book in a kind of roundabout way. Until Better Call Saul and Barry return, there's absolutely no first run TV shows that I have any interest in. Luckily there are a couple of channels showing old and classic TV shows, MeTV and Antenna TV. I've been DVRing old Carol Burnett episodes and stumbled across a couple of shows I'd never seen or heard of before: Lotsa Luck! and The Joey Bishop Show.
Lotsa Luck! was produced by Carl Reiner and starred Dom DeLuise as a New York City bus company employee who lived with his mother, sister, and deadbeat brother-in-law. It's a typical studio-bound 1970's sitcom, but for some reason I got hooked on it.
And then there's The Joey Bishop Show, a sitcom starring, of course, deadpan comedian Joey Bishop. Bishop had a decades-long standup career, was a fixture on 1950's and 60's talk shows (eventually guest hosting The Tonight Show over 200 times), was known for his quick wit, hosted the Emmy Awards multiple times, and most famously was a member of The Rat Pack, the uber-cool collection of superstar entertainer friends who briefly ruled Las Vegas, and according to this book helped make Vegas the destination it is today.
The Rat Pack was comprised of Bishop, Frank Sinatra, Sammy Davis, Jr., Dean Martin, and Peter Lawford. Sinatra was the undisputed king. Davis was an established song-and-dance man and entertainer. Martin had not yet made the transition from Jerry Lewis's straight man to a successful TV show host on his own. Lawford, a handsome, British-born film actor, was included mainly due to his connection to future president John F. Kennedy (Lawford had married JFK's sister Patricia).
Bishop's show, like DeLuise's, is pretty typical of its time. But it made me curious about Bishop. You know that expression "don't meet your idols"? I was shocked to discover that Bishop was absolutely loathsome and despised by so many people that by the time his career tanked, he had burned so many bridges that he was pretty much over despite only being in his early 50's. Eventually he even pissed off Frank Sinatra, who then declined to include Bishop in future Rat Pack projects and performances.
This book, just released in December, is the culmination of years of often combative interviews with Bishop in the years prior his death in 2007, along with some highly unflattering interviews with some of his co-workers from the sitcom.
Bishop paid his dues in his early years, working his way up from small clubs to popular nightclubs. At the time he was considered cooperative - most clubs were mob-controlled and Bishop was the kind of guy who knew how to keep his mouth shut, so the mobsters liked him. His career really took off when Frank Sinatra chose him as an opening act. It was an ideal situation for Bishop - he was a low-energy performer who would warm up the crowd, but not wear them out before the headliner took the stage. But after The Rat Pack became huge, he shifted into star, rather than sidekick, mode.
At this point in his career Bishop had two strikes against him - one, he was unable to update his act to fit changing tastes of the 1960's post-Rat Pack era. And as far as his sitcom was concerned, he was handicapped by not being trained as an actor. He also was a terrible tyrant to the people who worked on the show. Actors and writers were verbally abused and often fired. No one on the show seemed to have anything good to say about him. To add to Bishop's displeasure, the show was ripped to shreds by critics; in fact the original concept of Season 1 was was completely jettisoned for subsequent seasons. For various reasons the show was able to get through four seasons before getting the axe.
There was some hope that his skills were better suited to a talk show, which became his next endeavor. His late-night talk show was intended to compete with Johnny Carson and The Tonight Show, but after two seasons he was replaced by Dick Cavett, who like Carson was better equipped to interview more intellectual guests. Bishop's career never recovered.
The book also delves into the legendary Rat Pack and aims to dispel some of the long-term stories and legends about that era.
Joey, who had burned bridges earlier with Ed Sullivan and had alienated Danny Thomas, was attacking and firing the top writers and directors on his show, angering NBC executives with his prima donna-like behavior. But to bite the hand that fed him - Frank Sinatra - the man who made his entire career possible - that was tantamount to career suicide.
Posted by Melinda at 2:18 PM
Labels: Books, Film, Historic Hollywood, Music, Television, Theatre, Vegas Baby