Recent reading: "Inside the Rise of HBO" 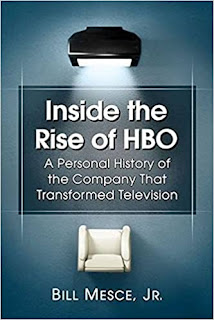 Inside the Rise of HBO: A Personal History of the Company That Transformed Television by Bill Mesce, Jr.
No, I didn't read this book in two days. I wish I could. I had about five books that I've started but never finished, so I decided to try and finish the ones I started before I start another one.
So I'm going to get the disappointing part of this book out of the way first: in addition to the HBO story, I was really hoping for a lot more in-depth information on the development of the original programming that really transformed the network from a movie channel to a dominating force in television. In fact, I spent most of the book waiting for Mesce to get to that part. I wanted to hear the stories behind shows like The Sopranos and Six Feet Under. Unfortunately there's not much about their development, just how important they were to the network as a whole. The book is more about HBO's business model than the actual shows.
He does spend a lot of time on the history of television, which I found fascinating. There's also a lot of technical stuff that went right over my head, like how signals were bounced back when HBO began as opposed to now with satellites, so if you like this stuff you'll love those parts of the book. Also, this book was published in 2015, so while there's a brief mention of streaming toward the end, it doesn't get nearly the attention it would get if this book was more recent. But it's about the rise of HBO, and it's been a hell of a rise - from a tiny cable station with barely any reach to the behemoth it is today. It's hard to remember a time when it wasn't, but this book is also a bit of a nostalgia kick with its stories from HBO's younger years.
In HBO: The First Ten Years, sports producer (and later chief of HBO's interstitial programming) Tim Braine tells of covering the Cowtown Rodeos in Woodstown, New Jersey (leave it to the still-floundering HBO to go to Jersey to cover a rodeo), where he had to signal the bronco riders to be released from the chutes "so we wouldn't waste any videotape by shooting too soon." In the same book, there's another story about the HBO crew removing the small pennants hung across a pool during a swim meet because they blocked their cameras, not realizing the flags were there to signal backstrokers they were close to smashing their heads into the side of the pool, which, thanks to HBO, they did.
Posted by Melinda at 10:41 PM Labels: Books, Film, Television