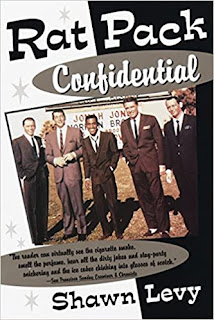 Rat Pack Confidential: Frank, Dean, Sammy, Peter, Joey and the Last Great Show Biz Party by Shawn Levy
My second Rat Pack book and another good one.
This book focuses primarily on Frank Sinatra, a lot on Sammy Davis, Jr., and a bit less on Dean Martin and Peter Lawford (his importance to the group was mainly his connection to the then up-and-coming John F. Kennedy) and even less on Joey Bishop.
It focuses a lot on the mob's involvement with Sinatra and Las Vegas, as well as both the mob's and Pack's involvement with the Kennedy presidential election and inauguration, and the subsequent deterioration of both's relationship with the Kennedy White House. Sinatra's infamous temper and violent outbursts get a lot of ink as well.
There's a lot of information on racial issues that Davis had to deal with over the years. I was surprised to learn that he took a lot of crap from the black community. Blacks thought he kowtowed to whites and some despised him for it, and while white audiences loved the gifted entertainer, he lived in an era where he could entertain these audiences but not stay at the same hotel as them. In fact Davis was instrumental in the eventual integration of Las Vegas hotels and casinos.
There's also a bit on Marilyn Monroe's sad ending. She and Lawford were close friends and he was trying to save her from herself at the end. In fact, some of her last words ever were made to Lawford, telling him, "Say goodbye to yourself, because you're a nice guy." The author makes no attempt to pin Marilyn's death on anyone or put forth a determination of murder, suicide, or accidental overdose, but does point out how she was used and abused by so many men around her that her destruction was pretty much inevitable.
One thing I didn't realized when I bought the book was how old it is - it was published in 1999, when Joey Bishop was the last surviving member of the Rat Pack. So everyone else's death gets discussed except his. I initially wondered why Bishop didn't get eulogized, then checked the publication date - it was because he was still alive at the time. Despite its age, it's a great book on the men of the Rat Pack (they preferred to refer to that brief, glorious run as "The Summit"), their lives, and the era they lived in.

If the Kennedys now found Frank's society politically untenable, the others party to the singer's audacious juggling game found his lack of juice with the Kennedy family infuriating. Frank had indicated to Giancana that the mob's assistance with Jack's election would be recompensed with the easing of federal inquiries into racketeering, but the fall of Sinatra's star in the eyes of the Kennedys coincided with an increasingly ravenous attitude toward the mob on the part of the Justice Department.