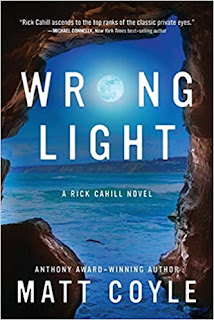 The fifth in Coyle's Rick Cahill series (currently he's up to number seven with another on the way).

Cahill is a former Santa Barbara cop turned San Diego P.I. with a lot of baggage. In Wrong Light he's hired by a San Diego radio station after their popular late-night call-in host, Naomi Hendrix, receives a creepy, vaguely threatening letter from an apparent stalker that the local PD doesn't think is threatening enough to investigate. Cahill disagrees with that assessment but is hindered by Naomi herself, whose insistence on keeping secrets of her past and not taking the threat seriously doesn't make Cahill's life or investigation any easier.

To complicate things Cahill gets a call from a vicious Russian mobster he owes a favor to, so in addition to trying to identify Naomi's stalker and keep her safe, he's obligated to take on a surveillance gig that he doesn't really understand...but is determined to figure out. And if he does it could earn him even more wrath from the Russians, who would have no problem eliminating him, something Cahill is well aware of.

Coyle is a master of fast-paced plotting and despite this book being 330+ pages, I got through it really quickly. There was no point at which I felt bogged down; it's the reading equivalent of riding a roller-coaster. I'm way behind on this series in addition to being out of order, but if there's anything I got out of Wrong Light, it's that I need to catch up.

Disclaimer: Matt Coyle was my first editor, when "Crime Drama/Do Not Cross" was published in LAst Resort in 2017. This didn't effect how impressed I was with this novel and how well it is written.