In celebration of the film's 25th anniversary, Fathom Events presented Fargo on the big screen this weekend. You can also catch it on Wednesday evening. 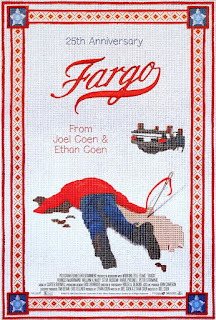 Fargo (PolyGram Filmed Entertainment/Working Title Films, 1996)
Starring Frances McDormand, William H. Macy, Steve Buscemi, Peter Stormare, John Carroll Lynch and Harve Presnell
Directed by Joel Coen
Written by Ethan Coen and Joel Coen
Winner of the Academy Award for Best Actress and Best Original Screenplay
Also nominated for Best Picture, Best Director, Best Supporting Actor (Macy), Best Cinematography and Best Film Editing
The perpetually inept Jerry Lundegaard (Macy) - the type of person my Dad used to charitably describe as "not one of life's winners" - needs money and lots of it, so he has come up with a hair-brained scheme to have his wife kidnapped for ransom. The idea is that his wealthy father-in-law Wade Gustafson (Presnell) will pay the $80,000 ransom, which Jerry will split with his partners-in-crime, and who will also get to keep the tan Oldsmobile Cutlass Ciera that Jerry has stolen from the dealership owned by Wade, where Jerry is a salesman. What he doesn't tell kidnappers for hire Carl (Buscemi) and Gaear (Stormare) is that he plans on telling Wade that the ransom is actually one million dollars, the balance of which Jerry plans to keep after paying Carl and Gaear $40k.
The unfortunate Jean Lundegaard is successfully taken from the family home but things go awry later that night on the way to the remote hideout in Minnesota when the Ciera is pulled over by a state trooper because Carl forgot to affix the temporary tags to the new, stolen car. Carl makes a bumbling attempt to bribe the trooper that falls flat. When the trooper discovers Jean hidden in the back seat, Gaear shoots him in the head. While Carl is attempting to drag the poor man's body off the road a young couple drives by, sees the horrifying scene, and takes off...with Gaear in hot pursuit. The bypassers lose control of their car, crashing off the road, where Gaear dispatches them to the great eyewitness beyond.
Carl advises Jerry that "blood has been shed" and demands the full $80k ransom. To make matters worse for Jerry, Marge Gunderson, the visibly pregnant Brainerd police chief, is now working the triple homicide and she'll eventually catch up with Jerry and the kidnappers, culminating with the infamous woodchipper scene. McDormand's portrayal of Marge, initially presented as a sweetly competent woman but eventually revealed to be fearlessly relentless in her pursuit of justice, earned her a well-deserved Oscar.
Some Fargo facts and trivia:
Sources:
Fargo on imdb - Fargo on Rotten Tomatoes - Helle Crafts Murder on Wikipedia - The Fargo Woodchipper
Posted by Melinda at 12:24 PM