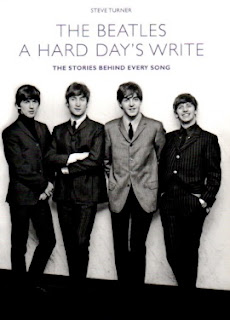 The Beatles: A Hard Day's Write by Steve Turner
The subtitle for this book is "The Stories Behind Every Song" and that it is. However, not even the most famous Beatles song warrants stories of any real depth here.
Having said that, it's not necessarily the fault of the author. John Lennon and Paul McCartney, who together wrote the bulk of the Beatles' library, are shockingly blase and/or at times even flippant about both the legendary songs they wrote and the sheer volume of those legendary songs. They were avid students of other songwriters and musicians who impressed them and so they set out to learn from those people how it was done, and/or to take inspiration from songs they admired. Throughout the Beatles recording career the songs they wrote were often surprisingly done in an almost textbook manner. Albums were being recorded and songs were needed to fill those albums. It was their job and they did it. It's stunning how nonchalant they could be about their genius and what they contributed to music.
It was fun reading about some of the real people who inspired Beatles songs. Julian Lennon's ties to 'Lucy in the Sky with Diamonds' and 'Hey Jude' are well known, but there were also real people who inspired Bungalow Bill, Lovely Rita the Meter Maid, Mr. Kite, and the girl who came in through the bathroom window. What was really surprising was finding out that the girl in 'She's Leaving Home' was inspired by a real young woman whose missing story in the newspapers inspired the song. She left in an attempt to escape her loveless, oppressive family (she wanted to be an actress, but her mother insisted she become a dentist) and was soon found and taken home. There's also a great thread throughout about how Lennon's deep-seated insecurity was quietly revealed through lyrics.
I would have liked to have heard more about George Harrison's frustration about not being able to break in as a Beatles songwriter, especially in later years. In 1969 he recorded three demos at Abbey Road Studios: 'Old Brown Shoe', 'Something', and 'All Things Must Pass'. It's telling that 'Old Brown Shoe' was the first released (as the B-side of 'The Ballad of John and Yoko'), while 'Something' made it on to the Abbey Road album and became an instant classic. 'All Things Must Pass' wouldn't see the light of day until Harrison made it the title song on his legendary solo album. Interesting factoid: 'Apple Scruffs', which also appeared on that album, was written about the diehard Beatles fans who hung out outside the Apple Studios hoping to see their idols. In fact, it was Apple Scruffs who broke into McCartney's home via the left-ajar bathroom window while he was out.
'Help' was written with Paul at John's Weybridge home, Kenwood, in April 1965. The lyric was a candid insight into John's dissatisfaction with himself. He was eating and drinking too much, had put on weight and felt trapped by fame. The song, he would later admit, really was a cry for help, despite being written to order for the film. " I needed the help," he said. "The song was about me."
Posted by Melinda at 6:02 PM
Labels: Books, Film, Music