However, one of the more bizarre pandemic-related things he's done is going the lottery route for people who've gotten the vaccine. Hosted by him, of course.

With that in mind, this just popped up on my social media: 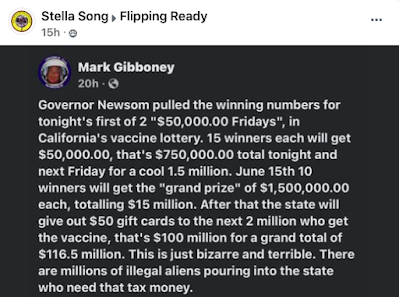 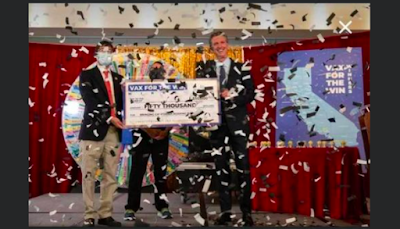 Okay, I totally get what the guy who posted it is going for, but just the oddness of it all is what's been on my mind lately. So I replied with this:

Unfortunately Serling is no longer with us and hasn't been for a long, long time. But I think it says a lot about his genius that decades later he's still our go-to guy for the bizarre, especially in terms of powerful political figures (or "the state" as Rod was fond of slyly referring to them). Tell me this doesn't look like a scene out of a Serling script.

We are truly living in bizarro world, but I'm still betting on the good guys to win. I just wish that day would hurry up and get here. I'm getting kind of tired of feeling like I'm living in an episode of The Twilight Zone.

Posted by Melinda at 2:37 PM
Labels: California, Famous Idiots, Health & Well-Being, I could use this in a script, In the News, Jerks, Screenwriting, State of the Union, Stranger Than Fiction, Television, The Plague, Writers, Writing