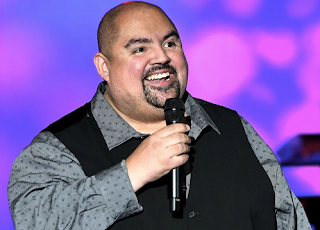 Comedian Gabriel Iglesias had to cancel a show yesterday after testing positive for COVID. He'd been vaccinated but contracted the virus anyway. If you know anything about Fluffy, you know this is probably the worst birthday ever, and not necessarily because of the aches and chills:

"Not the way I wanted to spend my birthday but at least I'm alive and I have cake," he concluded the announcement, adding, "I can't taste it or smell it, but I have it."

Fortunately, it seems like he has a mild case and should be okay, although one worrisome thing is his obesity. I've read in multiple places that a large number of COVID fatalities involve excess weight.

Another thing I thought was odd is that the issue of contracting The Plague after being vaccinated against it was kind of ignored. Iglesias credited the vaccine with getting him through it quickly, so to speak. But there's been so many stories circulating about side effects from the vaccine that it seems odd to gloss over it...but unfortunately not surprising. Most media is really towing the line when it comes to ignoring this aspect of the COVID story.

I know if I'd allowed myself to be punctured not just once, but twice with a needle containing what is (whether you like it or not) still really an experimental drug rushed to market, and then I caught the damn disease anyway, I'd be pissed. Even at my age I have a 99+% of recovering if I get it without benefit of being used as a human pin cushion. Why let someone inject me with the stuff.

Well, enough of that rant for now. Get well soon, Fluffy!

Pic snicked from the linked article.

Posted by Melinda at 7:26 AM
Labels: In the News, LOL, Rants, The Plague