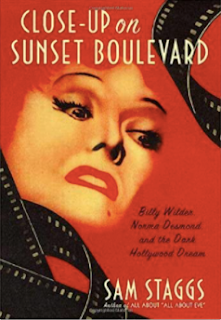 This exhaustingly comprehensive analysis of all things under the sun related to the classic film Sunset Boulevard was actually a bit of a slog to get all the way through, and that's coming from a long-time fan of the film. It's great when it's focused on the movie and the principle figures involved with bringing it to the screen, but a lot of it is Stagg opining instead of reporting and addressing every possible issue peripherally related to the film. This book runs 379 pages and at times felt like twice that. I did enjoy the amount of ink devoted to post-Boulevard Gloria Swanson, and Nancy Olson's interview and fascinating life were a high point in the book.
I found it hard to care about the backstage drama of the Andrew Lloyd Webber stage musical version (Patti LuPone thought she was going to star as Norma Desmond on Broadway and never forgave Webber for giving the role to Glenn Close; some genius thought casting uber-diva Faye Dunaway as Close's replacement in the L.A. production was a good idea and of course things crashed and burned), and Stagg frequently inserting his own often lofty opinions rather than simply stating facts became tiresome.
For some reason Stagg felt the need to wrap up the book with a largely withering critique of Wilder's work post-Sunset Boulevard, which had marked the end of his writing partnership with Charles Brackett. Reading this chapter, you would have thought that Wilder's career practically tanked after this film despite the fact that some of his post-Boulevard/Brackett films included the classic films Stalag 17, The Seven Year Itch, Some Like It Hot, Witness for the Prosecution, The Apartment, Sabrina, and Ace in the Hole.
This book is a great source of information about Sunset Boulevard, but you might want to skim through some of it and maybe even skip some of it.
From the book:
The Apartment has its legions of defenders, including those who picked the AFI's 100 funniest movies: it's number twenty on their list. The main reason I don't like it is hyper Jack Lemmon, whose tempo and twitches make me want to reach for a Valium. (I have similar adverse reactions to Betty Hutton, Robin Williams, Diane Keaton, and Jerry Lewis).
To me, The Apartment is as dated and threadbare as Camelot. I also find it jarring, for Wilder once again, as in Stalag 17, conflates incompatible elements - in this case, farce and ethics. It's a bit like casting solemn Gregory Peck in The Bed Before Yesterday.
Posted by Melinda at 4:59 PM Labels: Books, Film, Historic Hollywood, Screenwriting, Writers, Writing