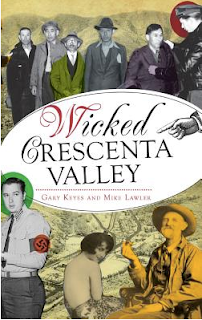 Wicked Crescenta Valley by Gary Keyes and Mike Lawler
My brother lives in an area that is part of the Crescenta Valley, a beautiful group of foothill communities in the San Fernando Valley that includes Montrose, La Crescenta, La Canada-Flintridge, Sunland, Tujunga, Verdugo City, and parts of Glendale. These towns are largely upscale, family oriented small communities. However, the area has a colorful history and the less law-abiding aspects of that history are highlighted in this slim (142 pages) volume that doesn't always go into great detail, but makes a great starting point.
The book is divided into ten chapters: Sex, Prejudice, Drugs and Alcohol (being remote yet so close to Los Angeles made it ideal for bootlegging), War (the area was a hotbed of American Nazi support), Oddballs and Freaks (including The Hog Farm, a hippie commune that briefly hosted Charles Manson before he was expelled), Cons and Swindles, Crime, Extreme Politics, Mean Mother Nature (including the notorious 2008 Station Fire and the resulting mudslides when winter rains came), and Sanitariums.
Again, because of its remoteness despite its adjacency to Los Angeles, the area became a desirable spot for sanitariums. In the late 1800's well into the 20th century, sanitariums treated anything from not just the mentally unstable, but also  tuberculosis, drug and alcohol addiction, the aged and infirm, or just simple "exhaustion" (movie stars Clara Bow and Frances Farmer spent time in Crescenta Valley facilities). These places flourished for decades, but most have since been leveled and the land developed (one of the most successful of these is now the location of a shopping center anchored by a Ralphs). Only Rockhaven still stands and the City of Glendale was recently granted funding to preserve it so that it won't vanish like so many historic buildings in Southern California.
This book was published in 2014, so I imagine most locals interested in the Crescenta Valley's history already have it. The Brother picked it up recently at a local bookstore (Once Upon a Time in Montrose). He had previously bought a DVD of the area's history at the same place, but I can't remember the name of it. But that DVD provides an amazingly comprehensive history of the area, including hours of extras. But Wicked Crescenta Valley is a good place to start if you're interested in less savory aspects of the valley's past.
Part of the drawing power of the property was that film star Clara Bow had spent some well-publicized time at Hillcrest for "recuperation from the effects of a strenuous career." Bow was a silent film mega-star in the 1920's who mixed the glamour of Madonna with the out-of-control craziness of Lindsey Lohan. She was the inspiration for cartoon character Betty Boop and Peppy Miller, the female lead in the Academy Award-winning picture The Artist. She was unstable and in and out of sanitariums for much of her career. The fact that she was at Hillcrest at the very height of her fame attests to its high-class status.
Posted by Melinda at 4:33 PM Labels: Books, Crime, Family, Film, Historic Hollywood, Historic Los Angeles