Words of Wisdom from a couple of old guys, and dumb words from another old guy

A couple of things...
First off, here's a great article from Airplane! co-creator David Zucker on the sad state of the entertainment industry kowtowing to a small minority of shrill, humorless keyboard warriors: 'Airplane' creator slams joy-killing threat: 'Twitter 9 percent'. Also, does he sound like a cool dad or what? 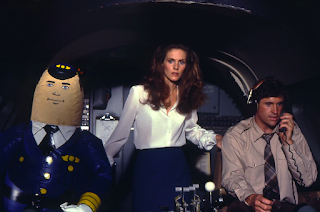 Julie Hagerty has the greatest hair ever in this film.
So jealous.
There's also a link to an article about HBO Max putting a "warning" in front of their airings of the classic comedy Blazing Saddles. I couldn't bring myself to waste brain cells reading that one since I know it's going to be painfully lame and probably annoyingly hectoring as well. Just hearing about the "warning" made me flash back to the condescending warnings on the Looney Tunes DVDs. You mean ethnic and racial stereotypes are bad? Gee, thanks for the enlightenment, Warner Bros.! I had no idea. Seriously, if you have to be told that, much less lectured, maybe you shouldn't be trying to operate a DVD player. Also, I'm never a fan of being talked down to, especially as a consumer, so there's that as well.
Like many fans who grew up on Looney Tunes, I know the difference between cartoons and real life, I understand that society has changed over the years and decades and I understand that works of art created in different era will reflect the values and attitudes of those eras. It's not rocket science.
Speaking of rockets, William Shatner, Captain James Tiberius Kirk himself, blasted off into space earlier this week and by all accounts had, well, a blast. From the linked article:
The actor grew emotional and was occasionally at a loss for words describing the flight to the man who made it possible.
"It was so moving to me," Shatner said. "This experience is something unbelievable."
He said that he was overwhelmed, and that Bezos has given him the most profound experience he can imagine. "I'm so filled with emotion about what just happened...it's extraordinary," he told Bezos.
"I hope I never recover from this. I hope that I can maintain what I feel now," he said. "I don't want to lose it." 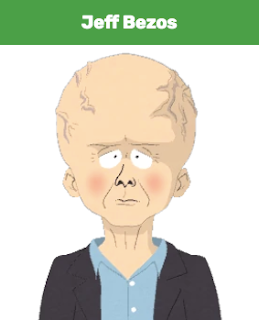 Jeff Bezos, per South Park. Just sayin'.
Do read the whole article and play the video of Shatner reacting to the flight. It's priceless how blown away he was by the experience. I thought he did a pretty good idea of articulating his thoughts, given the mind-boggling circumstances.
When his Star Trek costar George Takei was asked for comment, for some dumbass reason known only to him, he felt the need to piss on Shatner's parade, making these comments (bold mine):
"He's boldly going where other people have gone before," snarked Takei, 84, to Page Six when asked about Shatner making history as the oldest person to ever go to space.
"He's a guinea pig, 90 years old and it's import to find out what happens," Takei added while at the opening of "Thoughts of a Colored Man" on Wednesday night.
"So 90 years old is going to show a great deal more on the wear and tear on the human body, so he'll be a good specimen to study. Although he's not the fittest specimen of 90 years old, so he'll be a specimen that's unfit!"
Imagine that. A 90-year-old guy who isn't "the fittest specimen". The 84-year-old Takei on the other hand sounds like a petty teenage girl snarking on the popular girl and thinking she's oh-so-clever but actually sounds like an idiot. Sure, Shatner may be a little on the beefy side but at least he's not a jealous, petty little bitch. Whatever, Sulu.
Apparently Shatner was going to let it go, but was encouraged to respond, so he took to Twitter (as one does these days) and this is what he had to say about that: 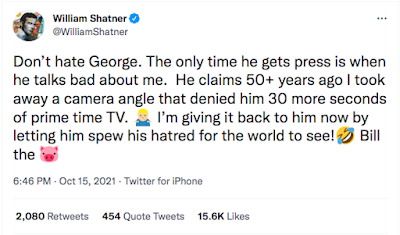 There were some great reactions to his statement: 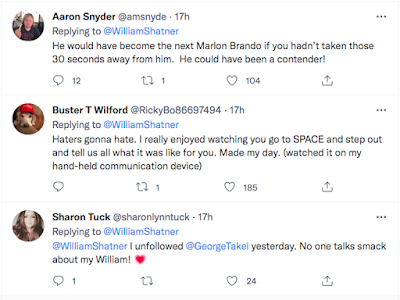 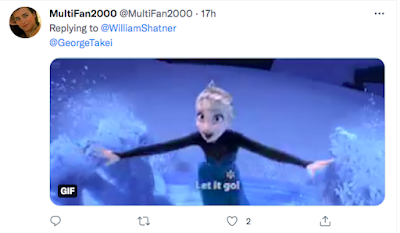