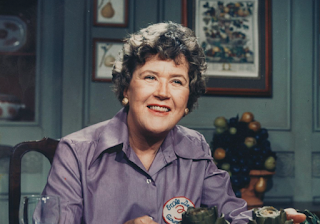 WGBH presented this webinar today that featured Chef Jacques Pepin and author Alex Prud'homme (who is Julia Child's great-nephew, co-writer, and keeper of her legacy) discussing Julia Child and cooking for Thanksgiving.
And it was delightfully informative, beginning with this tidbit:

It was a brief but fun and informative webinar. I hope they do more of these.