Recent reading: "Always Look on the Bright Side of Life: A Sortabiography" 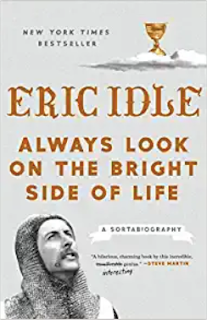 Always Look on the Bright Side of Life by Eric Idle
After the trauma of Verity, I needed a palate cleanser. Monty Python's Eric Idle provided it.
In addition to being the title of both this book and the famous song that closed out Life of Brian, always looking on the bright side of life seems to be Idle's lifelong philosophy. His childhood was rough - his father died when he was a child. Having survived World War II in the Royal Air Force, Idle senior perished in a traffic accident while hitch-hiking home to his family. Eric's mother descended into an understandable depression and he went to live with his grandparents for a while before being dispatched to a boarding school that was at best tough and at worst brutal. He seems to have responded to it all with a sense of humor and doesn't seem to have any lingering issues despite his less than privileged early years.
Once at college he began writing and performing, putting him on the path that would eventually lead to Monty Python, and the rest is history. In addition to his own stardom, this led to his association and friendships with many hugely famous people, especially George Harrison, but also including Robin Williams, David Bowie, The Rolling Stones, Lorne Michaels, Joni Mitchell, Paul Simon, Pink Floyd, Led Zeppelin, and Carrie Fisher, and he writes warmly about most of them (the exceptions being Harry Nilsson, who apparently took himself a bit too seriously for Idle's taste.
A huge part of Idle's life has been his second wife and soulmate Tania. He makes no bones about being a less than perfect husband to his first wife Lyn and an often absent father to their son Carey, but luckily figured out the monogamy thing by the time he met Tania.
This is a hugely entertaining bio by a big star who didn't have to go off the deep end and hit rock bottom before figuring out life, and in that alone it is refreshing. Whatever bad things he might have had to deal with, Idle dealt with them intelligently and with a indefatigable sense of humor. It's a bright, fun look at the life of one of the founding members of the greatest sketch comedy team ever.
John Cleese's eulogy of Graham Chapman:
Graham Chapman is no more. He has ceased to be. Bereft of life, he rests in peace. He has rung down the curtain and joined the choir invisible. And I say good riddance to him, the freeloading bastard. I hope he fries. And I say that because if I hadn't said something inappropriate he would never have forgiven me.
Posted by Melinda at 2:46 PM
Labels: Books, Film, LOL, Music, Television, Theatre, Writers