Screening: Jaws at the Alex Theatre

The Alex Film Society presented Jaws on the big screen at the Alex Theatre in Glendale last night.  The screening was preceded by an interview with the film's screenwriter, Carl Gottlieb. 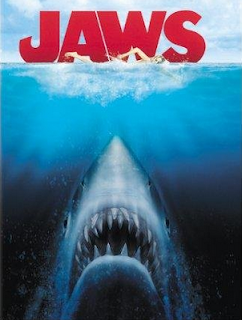 Just as its crucial summer tourist season is about to begin, the small beach community of Amity Island becomes the happy hunting ground for a terrifying and ruthless predator: a great white shark with a voracious appetite.

Recently appointed Police Chief Martin Brody (Scheider) wants to shut down the island's dangerous beaches after a pair of shark attacks in Amity's waters, but with the lucrative Fourth of July weekend approaching he's thwarted by Mayor Larry Vaughn (Hamilton) and locals more concerned with business than safety.  But when a third attack plays out in front of Amity's holiday crowd, summer is over and the hunt for the great white shark is on.  Along with young shark expert Matt Hooper (Dreyfuss) and Quint (Shaw), a local shark hunter, Brody heads out to sea to find and battle the beast.

Some Jaws factoids:
Sources/Links:
Jaws on imdb - Jaws on Wikipedia - Jaws on Facebook - The Shark is Still Working on imdb - The Shark is Still Working on Facebook - JawsMovie.com - Jawsfest - Jawfest on Facebook - Jawsfest on Twitter - Jaws by Peter Benchley - The Jaws Log by Carl Gottlieb - Jaws: Memories From Martha's Vineyard by Matt Taylor - Just When You Thought It Was Safe: A Jaws Companion by Patrick Jankiewicz
Posted by Melinda at 9:41 PM No comments:
Labels: Film, Screenings

I didn't even get close to using up all the fruits and veggies from last week and it's Tuesday already.  This concerned me, but opening the second box was like Christmas all over again: 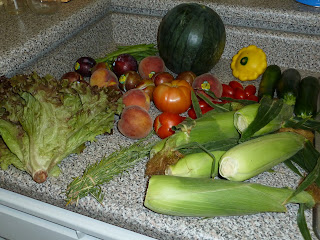 That's a watermelon, lettuce, green beans, more peaches, a whole lot of pluots, the most fragrant bunch of rosemary I've ever had the pleasure of inhaling (seriously, my kitchen currently smells like I live on a farm), 1 summer squash, 3 zucchini, a variety of tomatoes and 6 ears of corn.

I feel like I'm getting a handle on creating meals around this bounty rather than trying to incorporate them into my existing diet.  I don't think I'll end up wasting as many of this week's box.

I have to admit that when I got online yesterday and saw green beans on the list, I felt bad because there was no way I was going to use those.  They were just going to go to waste.  One of the reasons I was eager to try Abundant Harvest was to expand my diet, but some of my most traumatic childhood memories involve sitting at the dinner table long after everyone had finished, expected to gag down the canned green beans sitting uneaten and undesirable on my plate.  And the few I got down really did make me gag.  I was part of the "starving children in China" generation so leaving anything on the plate, however disliked, simply wasn't acceptable.

But as I looked at these fresh, organic green beans, I couldn't help but feel like I should at least give them a shot.  I snapped one in half and boy, did it *snap* - loudly.  I took a bite and instead of being transported back to those awful days of being left at the table with my putrid, hated veggies...I wasn't.  In fact, I was pleasantly surprised.  The green bean didn't really have much of a taste of its own; they're kind of like broccoli to me in that I only like them raw, possibly dipped in ranch, but there was no sign of the soggy crap that cursed my childhood dinners.  I ate several of them and I'm happy to report that they won't go to waste.  Which is a good thing, because starving children in China and all that.
Posted by Melinda at 10:22 PM No comments:
Labels: Foodie Stuff

The latest incarnation of the Industry Insider Screenwriting Contest has arrived:


A New England Matriarch with a week left to live pledges her fortune to whomever in her small town fulfills her dying wish.

As always, the only restriction is the logline itself.  It can be any genre you choose.  Deadline for submitting the first fifteen pages of your script is September 15.
Posted by Melinda at 11:21 AM 2 comments:

(Most of) the haul from my first Abundant Harvest box: 1 eggplant, 1 bunch chives, 1 head red leaf lettuce, 1 cucumber, 4 zucchini, 3 small tomatoes, 5 peaches, 5 nectarines, 3 beets, 1 cantaloupe & a dozen small red potatoes (plus a grassfed top sirloin added on to the order). It was like Christmas when I opened the box. 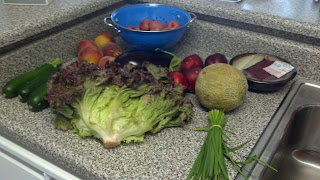 I already started on the lettuce, cuke, potatoes & chives for dinner. Yum!
Posted by Melinda at 8:24 PM No comments:
Labels: Foodie Stuff

The pirate house is having some work done. Will they be adding to the pirate crew? 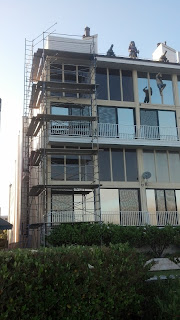