Romance AGAIN??? Third out of four times??? What is this, a fucking conspiracy???

MoFoing SOB. I hate romance as a genre. Too wimpy and predictable. Give me a shot at hard-boiled crime, I will rock that.

Detectives in love, bitches. I'm gonna make that happen again. I have the whole weekend.

Son of a bitch. I want to punch this sorry genre in the ovaries.

Now get writing. Something.

Debating whether I want to do this to myself again

The Flash Fiction Challenge is back. I've done it a couple of times in the past with little success. The last time I wrote two stories and although the feedback on the first one was good, the second one (which I thought was much inferior to the first) was the only one that placed, and not well enough to get me into the next round.

In each challenge, entrants are randomly assigned a genre, location and an object, all of which must be included in the story. I like mystery, crime and drama. Last time I got romance/haunted house/marshmallows and historical fiction/church/bucket. I went with detectives in love and preachy post-World War II Los Angeles.

One reason I think I'm going to do this (even though I'd pretty much had my fill of this competition last time) is that I'm just getting back into the swing of writing on a regular basis. When I was in culinary school, I was either too exhausted to do much writing, or if I was, I felt like I should have been concentrating on school stuff. Also, I'm working on a collection of short stories that I plan on self-publishing and if nothing else comes of this competition it might provide me with a couple of writing prompts. Yeah, that's how I'm going to look at it. I'm not going to flip out at all when I get a genre that does nothing for me. Right.
Posted by Melinda at 11:58 AM No comments:
Labels: Writing, Writing Competitions

One month until the new L.A. Quartet

James Ellroy's Perfidia, the first book of his second L.A. Quartet, will be released on September 9. I don't think I've ever been this excited for a new novel. Ellroy released this video today:

I like the comment on the Facebook announcement about Ellroy needing to read his own audiobooks. I'd buy both the hard copy and audiobook if he did that.
Posted by Melinda at 11:03 AM No comments:
Labels: Books, Historic Hollywood, Historic Los Angeles

Review: The War of Art

Bought this a while back, but didn't get around to reading it until a bout of insomnia the other night. 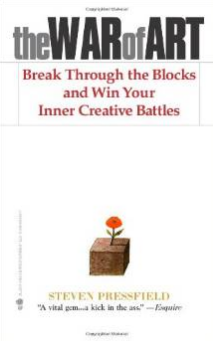 The War of Art, by Steven Pressfield (The Legend of Bagger Vance), is great for procrastination champs like myself. That's the good news.

The book is broken into three parts (or Books, as Pressfield refers to them). The first part identifies what Pressfield calls Resistance, that mysterious something that prompts some of us to find reasons for and rationalize putting off things (mainly creative endeavors) that we feel called to do, want to do, but for some reason can't seem to make ourselves do. Resistance is what some would call self-sabotaging behavior. Writers call it block.

Some words of wisdom from part 1:

The second part tells us how to combat our blocks and self-sabotaging behavior and it's pretty much what we already know - that we need to be disciplined, to not make excuses for our inaction. We need to "Turn Pro", as Pressfield calls it, to apply the same behavior to our creative outlets that we do to other responsibilities in our lives. For example, you may hate your day job, but you show up and put in the time and work because you have to. There are bills to pay and mouths to feed, so you do it because it's what responsible adults do. It's what professionals do.

Pressfield's solution to creative and personal blocks is simple and common sense - stop making excuses and just do whatever it is you feel compelled to do. Do what you have to do. And there's no guarantee that you'll succeed, but do it anyway. It may seem like an overly obvious solution, but lets face it - sometimes you need someone to smack you a few times with the Obvious Stick. Pressfield is that someone.

Pressfield is upfront about his belief in God, although he doesn't press the reader to share his beliefs, just to buy into the idea that there is a higher something compelling you to write, paint, create, even start a business. Turning Pro struck me as a pretty effective Christian analogy. Resistance is Satan, trying to keep you from honoring God by not exercising the gift He has given you. Instead of making excuses for falling victim to the temptations of the world (the path of least resistance), the Christian and creative both know what they have to do to avoid evil/Resistance, they know they have to make the conscious decision to honor God by rebuking Resistance and doing the work. Because that's what procrastination and excuses are all about - you know what you have to do, but you find a reason not to do it, and you do it day in and day out, even though you know it's the wrong thing to do. Turning Pro means you suck it up, sit down and stop making excuses or putting the work off for another day. You do the right thing whether you like it or not.

Some words of wisdom from part 2:

The third part of the book is what I think puts off a lot of people, at least based on these reviews on Goodreads. After two chapters of logic, self-examination and common sense advice, Pressfield introduces us to his world of muses, angels, psychic forces and extra-dimensionality, of messages received in dreams, all as a seemingly obvious and necessary part of the creative process and combating Resistance. It's a huge shift and I found it disjointed and disconcerting, and I think I'm probably more receptive to what I referred to above as the Christian analogy than most creative types who will pick up this book. If he needs to pray to the Muses every morning before he sits down to work, if he considers it necessary to "take a minute and show respect to this unseen Power who can make or break me", that's great. Whatever works. But it seems oddly new agey after all the brutally honest real-life observations in the first two parts of The War of Art.

The jarring spirituality aspect notwithstanding, there's a lot of good, solid advice in The War of Art. To think of art as work, something that you have to show up for because that's what you do, and not make excuses for avoiding. Pressfield constantly emphasizes professionalism and the need to accept that it's a lot of work to create, and that the work will be its own reward. The first two parts are valuable enough to recommend this book to people who want to do things with their life, whether if be creative, self-improvement or making the world a better place, but can't seem to bring themselves to pull the trigger, whether due to fear, doubt, laziness or anything else. Two out of three isn't bad. The first two parts are all of about 95 pages, and the short, one/two page chapters make for fast reads, as each point is made quickly and efficiently. And if you live in a world of angels, muses and dream messengers, then congratulations, in Pressfield you've found both a soulmate and advisor.