Stenographers for liars - "Ferguson" the play, personal agendas and the death of skeptical journalism

So a bunch of unknown actors - which I understand doesn't mean they aren't talented, just not household names - quit a play about the Ferguson, Missouri shooting of Michael Brown by Officer Darren Wilson because they (cue Jack Nicholson voice) couldn't handle the truth. From the linked L.A. Times article:


"Why not shoot him in the leg?" asked one actress, Donzaleigh Abernathy, cast to play a witness, her voice booming through the small, windowless space.

Because common sense, when you shoot at someone, you aim where you have the best chance to hit. In other words, the largest part of the target. In this case, at his body. If he's running at you, chances are you're going to miss if you aim for a rapidly moving leg. There's a reason the expression "couldn't hit the broad side of a barn" exists. Not to mention the part where things are happening really fast and you only have a split second to make a life-or-death situation. Too bad the L.A. Times did't see fit to mention any of this in their article.

One of the actors actually made these comments about the playwright:


"He claims that he wrote this to try to get to the truth of it, but everybody's truth is totally subjective,"

"It just didn't feel right to me."

If you'd like to read a more balanced and informative article about the play and playwright, The Argonaut (a free community publication, take that L.A. Times) has a great one this week: You Decide the Ferguson Verdict. Some highlights:


"Every word on that stage is uttered by a witness. It's all as said in the grand jury room," said "Ferguson" playwright Phelim McAleer, a Marina del Rey resident. "It's verbatim theater."

Unlike the Times article, the Argonaut piece gives you some background on McAleer and his real-life experiences with serious journalism and the harsh realities of life and conflict:


Throughout the 1990's, McAleer worked in Belfast as a reporter for the Irish News and the UK Sunday Times.

Ireland during The Troubles gives McAleer a particular frame of reference for when Americans discuss the para-militarization of the police.

"We actually had an actual shoot-to-kill policy by the police," McAleer said.

His interest in staging a play in which audiences can "see eyewitness testimony spoken by real people and see what the grand jury saw" was driven by dissatisfaction with media coverage of the shooting and its fallout.

McAleer deems coverage of the Brown shooting "the death of decent, skeptical journalism".

"They became stenographers for liars rather than skeptics."

"They were very industrious in promoting lies."

The L.A. Times article doesn't do anything to offset McAleer's comments about the media. No wonder the mainstream media is a joke and has seen better days.

Do check out the whole Argonaut article at the link above. Props to its author, Michael Aushenker, for writing an article that doesn't have a personal agenda. You know, journalism.

Behold, the Taco Cannon. Yes, it's a real thing and the University of Nebraska Omaha has obtained one for their new hockey arena. Well done, Voodoo Taco. Congratulations on being seriously awesome.

I can assure you there are actually very few hockey fans who wouldn't mind having a taco shot at them at high velocity. Hockey fans love their tacos. Especially if it's free. Bonus points for launching them out of a freaking cannon. You can keep your t-shirts.

I'm really looking forward to seeing footage of this thing in action. I'd really, really like seeing it in action in person, Staples Center.

The boating version of the 405 Freeway

I was taking a channel-to-pier walk earlier this evening and I don't know what was going on, but even though it was already 6pm there was quite the sailboat convention going on in the waters outside the Marina del Rey Channel:

He's in The Twilight Zone!

Actor James Best passed away last night at the age of 88. As he predicted, he's being remembered for playing a bumbling fool on a less than cerebral TV show. But before he spent seven years as a hapless hick, he was featured in three memorable Twilight Zone episodes: "The Grave" (with Lee Marvin), the titular role in "The Last Rites of Jeff Myrtlebank" (as a guy who wakes up at his own funeral) and lastly as the bewitched beloved of "Jess-Belle".

Best was incredibly blunt about the difference between working on The Twilight Zone and Dukes of Hazzard:


“I did The Dukes of Hazzard series for seven years and we had a chain of writers over there — there was so much nepotism they wouldn’t have allowed any good writers to come in other than their own, which is unfortunate. So consequently, I worked seven years for writers who had the imagination of a banana.

“Now on Twilight Zone, it was really a pleasure working on something that had the quality and the marvelous writers.

“I am going to go to my grave with ‘Rosco P. Coltrane’ on the headstone. I’d much rather go to my demise with ‘He’s in The Twilight Zone‘!”

I can see where he'd rather be remembered like this: 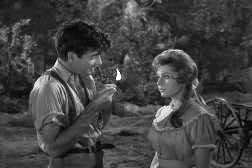 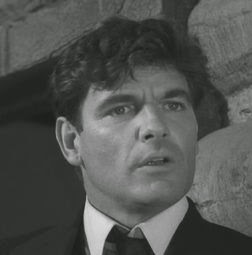 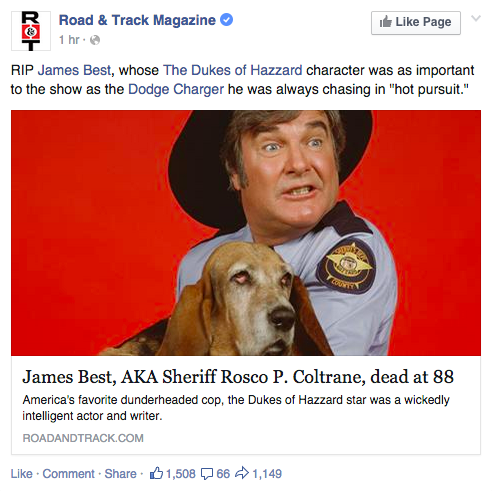 Having never seen a moment of Dukes of Hazzard, he's totally "in The Twilight Zone" to me. Consider it done, Mr. Best, and rest in peace.

Posted by Melinda at 4:48 PM No comments:
Labels: Television

Get ready to laugh until you cry: Surviving Whole Foods

H/T to Empowered Sustenance on FB.

And hey, as long as we're on the subject of Whole Foods...


Posted by Melinda at 6:16 PM No comments:
Labels: Foodie Stuff, I Customer, LOL

That one time when the internet wasn't forever

Online screenwriting program Scripped has crashed and burned in a way that I'm sure no one saw coming. This is the biggest data loss I've ever heard of. What are the odds that you lose both your primary and backup data at the same time?

This morning they sent out this email:


Dear Scripped Community,
In light of many of emails, both kind and angry, inquiring about the state of our recovery process from this disastrous loss of data, I want to extend a more personal message to the users that have relied on our service. I feel deeply for the writers who lost entire screenplays and are disappointed and angry that their data was inadvertently erased.  I have been so impressed by the love that people have for the Scripped community and brand.  There has been so much genuine affection for this community and the team that built it. This is not the way an organization or service should have ended.  You deserve a more personal and comprehensive email regarding this event.
I want to share a few answers to questions and some news.
Who owns Scripped?
ScreenCraft Media recently acquired the Scripped community as the sole owner from Scripted. (The service had previously gone by the name of Zhura, which you'll still find named in the Terms and Conditions.)
How did this loss happen?
During the recent transfer of ownership, all backups were deleted by the previous owners. Unfortunately the continuous backup process referenced a no longer accessible server data image. A routine server reboot caused a previously unknown rebuilding task in queue to re-image the server and delete all current data. The backup images that should have been used during the triggered rebuild were blank. This resulted in a total loss of data on the server with no backup.
Are any screenplays recoverable?
The previous owners have been very helpful in exploring the cause of this loss and they have recovered a server image from November 2010. If you have an account dating back five years to that time (or before), please email me with your name and email associated with your account and we can recover your files. No backup files exist from 2011 forward.
This event has led to the prompt closure of Scripped as a community. We had high hopes to breathe new life and development into the waning Scripped forum and unstable software, but I never once imagined that it would become a cautionary tale of cloud data instability and crash under my watch. This sudden loss of data has left us no choice but to close the community.
This has been a heavy few days for me and the Scripped team. I feel the bitterness of loss for the dozens of writers who have emailed us about lost screenplays and notes.
Please reach out with any questions and comments. I'll continue to respond to every single email personally and promptly.
Sincerely,
John Rhodes
Scripped.com and ScreenCraft Media
Please direct all questions to contact@scripped.com

I didn't have anything with them, so I'm not sure how I got on their mailing list. Probably signed up a couple years ago when Final Draft decided to be a bitch and suddenly stopped saving changes. Luckily I ended up using Screenwriting Pro instead of Scripped.


Open letter to our users
Dear Scripped community,
As you may be aware, Scripped.com has been dealing with mounting technical problems and outdated technology. We have been planning to shut down for some time, but we had envisioned a much more graceful transition than what has occurred.  Due to a serious technical failure Scripped has little choice but to shut its doors effective immediately. We want to thank our loyal writers who have used the service.
WHERE IS MY SCREENPLAY?
Due to a simultaneous malfunction in our backup services and primary servers, the unthinkable has happened and all recent script content has been lost. We sincerely apologize for this. If you did not download a backup copy of your screenplay, then we regret to inform you that it no longer exists.
WHAT CAN I DO NOW?
In order to honor our users, we've partnered with WriterDuet, the industry's most powerful screenwriting software. WriterDuet is a web or desktop app that features real-time collaboration and infinite revision tracking. It offers automatic backups to its cloud storage, Google Drive, Dropbox, and your hard drive. WriterDuet is used by Hollywood professionals and it has industry-standard pagination and formatting. It's able to import files from PDF, text, Celtx, and Final Draft formats, so Scripped users can upload any backup documents they've saved. If you choose WriterDuet, you're in good hands.
The basic version of WriterDuet is completely FREE. Sign up here.
Thank you for your support and we wish you continued success in your future writing endeavors.
Sincerely,
Team Scripped
Please direct all questions to contact@scripped.com

The big mistake they made IMO was shutting down their social media accounts. I'm sure they were getting a shit storm from users, but in this day and age it's the logical outlet for voicing complaints and they should have at least left their Facebook and Twitter accounts open so users could vent.

I was advised years ago to keep multiple backups of my work, so hopefully Scripped users did the same and most of the work that was lost exists elsewhere.

I also wonder how many people actually used Scripped. Based on both the email and site statement, it doesn't sound like the service was long for this world anyway. Not to mention this Twitter snark:

Posted by Melinda at 8:43 AM No comments:
Labels: I Customer, Writing
Newer Posts Older Posts Home
Subscribe to: Posts (Atom)