The government wasting money on ridiculous crap?  Broken political promises?  Obama getting a pass from the mainstream media?  YOU DON'T SAY!!!

On Drudge, a picture tells a thousand words.  The accompanying headlines tell a few thousand more. 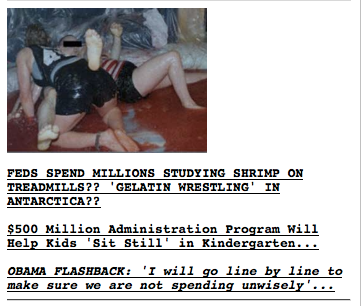 <Obama voice>AHAHAHAHAHAHAHA!!!!</Obama voice>
Shrimp on treadmills?  Gelatin wrestling in Antarctica?  No wonder Hollywood loves these guys, at least they come up with original ideas.  Unlike some people we know.  As for "helping" five year olds sit still...not sure where they're going with that.  Horse tranquilizers, maybe?

The only way this could get any better is if Obama is confronted with the line-by-line thing and responds by looking confused and protesting, "But I did go line by line to make sure we're not spending unwisely.  What?"
Posted by Melinda at 2:53 AM
Labels: Media, State of the Union