If this was Sophie I would be distraught


Animal lovers plan to rev up a nearly 2-month-old search at John F. Kennedy International Airport on Saturday for Jack the cat, a fluffy orange feline whose disappearance at the hands of American Airlines has spawned a Facebook page and a PR headache for the airline.

The date has been declared Jack the Cat Awareness Day by organizers of the afternoon search at the cargo area of JFK where Jack was last seen Aug. 25. That's when Jack's owner, Karen Pascoe, checked the 18-pound cat in for their flight to California, where Pascoe was to begin a new job.

That's where the mystery begins. About a half-hour later, a baggage supervisor called Pascoe and told her that Jack's crate was empty. Searches so far have turned up nothing, and nobody has explained how the cat crate fell open as Jack waited for cargo handlers to load him onto the jet.

So far efforts to locate Jack have failed.  Luckily, Jack got lost in the day and age of social media: Lost Jack's Facebook page.

I really hope he turns up and that he and his owner get a Hollywood-style reunion.  If this was Sophie I'd be worried sick about her.

So if you're in the JFK Airport area and spot a wayward, fluffy orange tabby, this is for you: 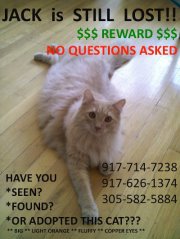 In the immortal words of one commenter, "Get back, Jack."