Screening: It's a Wonderful Life at the Egyptian Theatre

The Christmas classic was shown on the big screen at the Egyptian Theatre just a few days before the holiday weekend. 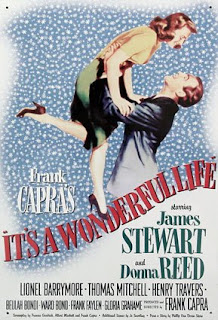 George Bailey has reached the end of his rope.  Hearing the prayers of the many people who love him and have benefited from his kindness and generosity, the heavens take pity on George.  Clarence (Travers), a guardian angel desperately trying to earn his wings, is assigned the task of saving him.  But first Clarence must learn George's story and how he came to this hopeless point in life.  What unfolds onscreen is the story of a man with dashed big dreams of escaping what he considers to be a meaningless, small-town existence, and how he learns how much of an impact a seemingly small, meaningless existence can have.

George (the fantastic child actor Robert J. Anderson) is a good kid with big dreams and ambitions.  He's also a lifesaver, literally.  He saves his younger brother Harry when the boy crashes through some ice while playing, and saves a couple more lives when he prevents his employer Mr. Gower, the town druggist, from accidentally filling a prescription with poison (the old man was distracted by grief, having just received news that his son had died).

We then see George as a young man (Stewart) ready to leave Bedford Falls behind and take on the world.  Unfortunately for George things don't always go as planned and he's forced to stay behind to take over his late father's struggling building and loan company, lest it fall into the hands of the town's wealthiest citizen, the slumlord Mr. Potter.  A deal is struck for Harry to head off to college first, with the understanding that when Harry returns, he will take George's place at the savings and loan, freeing him up to head to school and pursue his adventures.  However when Harry returns home four years later, it's with a lovely bride whose father has offered him a great job elsewhere.  To add insult to injury, when World War II starts, George is unable to enlist because his rescue of Harry when they were kids resulted in an illness that left him deaf in one ear, while Harry goes on to become a famous war hero, saving hundreds of his fellow soldiers.

George's life in Bedford Falls becomes increasingly entrenched as the years go by.  He acquires a bride, Mary (Reed) a home and children.  As time passes his dreams of great adventure and success begin to fade into the past.  His building and loan company make life better for numerous denizens of Bedford Falls and keep Mr. Potter from completely taking over the town and trashing it.  His good work doesn't make him rich, but it is a good life, even if it isn't the one he'd originally envisioned for himself.

Things come to a breaking point on Christmas Eve when the absent-minded Uncle Billy (Mitchell) accidentally misplaces $8,000 of the building and loan's cash (with an assist to the evil Potter, who finds the money and keeps it).  With a bank auditor breathing down their necks, they are suddenly faced with the possibility of bankruptcy, prison and ruin.  Distraught, George rips into Uncle Billy, then later bolts from his home, leaving behind a worried family.  He's even reduced to begging Potter for help, only to be mocked for the $500 equity in a $15,000 life insurance policy George tries to offer as collateral.  Potter then cruelly notes with that policy George is worth more dead than alive.

George ends up at a bridge on the outskirts of town.  He makes the horrific decision to end it all by plunging into the icy water below, but then Clarence goes into action, jumping in himself knowing that the honorable George will save him, which he does.

Despite the rescue, George understandably considers the self-described guardian angel as daft, but when he suggests that he would have been better off never having been born, Clarence has a light bulb moment and gives him his wish, showing him exactly what life in Bedford Falls would have been like without him.  It's not a pretty sight.  Bedford Falls has become Pottersville, a sleazy, lawless place overrun by dance halls and pawn shops.  The townspeople whose lives were improved by Bailey's savings and loan are trapped in Potter's slums.  The town, once a decent, peaceful place to live has become a cesspool.

Even worse is the human toll of George's non-existence.  Because George wasn't there to pull him out, his brother Harry drowned after crashing through the ice, and Clarence points out that since Harry didn't grow up to be a war hero, all the soldiers he saved are now dead as well.  The loss of her only son has taken a horrible toll on their mother, who now runs a boarding house and is bitter and ugly, both in manner and appearance.  Mr. Gower is now a doddering, pathetic drunk, a target of mistreatment and derision because George wasn't there to prevent him from accidentally poisoning a sick child when he filled the prescription with poison.  And his beloved Mary never found love without him.  Instead of the beautiful and vibrant wife and mother George knows, she is now a mousey, timid spinster.

George is pushed to the edge again, but this time by his desire to live and have his life back.   He ends up back at the bridge, begging to be restored, and he is.  When he returns to town it has changed back to Bedford Falls, and not even the prospect of prison can dim his newfound joy and appreciation for his existence.

He arrives home to find the bank examiner and law enforcement ready to arrest him, but during his absence Mary put out the call for help and all the townsfolk that George helped over the years descend on the Bailey house, donating their life savings to the man who donated his life to them. Then war hero Harry arrives and toasts his brother with the simple words that always move me to tears, every single damn time, without fail (even right now while typing them): "To my big brother George, the richest man I know."  A bell on the Bailey's Christmas tree chimes, prompting the littlest Bailey, Zuzu, to make the famous announcement, "Every time a bell rings, an angel gets its wings!"  Clarence has finally made it.  Cue "Auld Lang Syne" and one of the greatest endings in the history of film.

And yes, I had something in my eye as I was leaving the theater.

Some It's a Wonderful Life trivia:
Sources/Links: