1) Fill blender to top with a couple ice cubes and chunks of yellow watermelon (yes, they exist!) from today's Abundant Harvest Organics haul:


2) Pour in the rest of the tequila I had in the cupboard.
3) Squirt in indiscriminate amount of light organic agave nectar, without measuring, just like they do on Food Network.
4) Blend until liquified and sporting a fluffy, foamy top layer (which was much prettier to look at than drink, BTW).
5) Pour into margarita glass. Add in a squeeze of lime.
6) Take amateurish, poorly composed snaps that look nothing like the ones on real foodie blogs :( 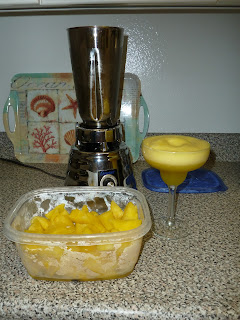 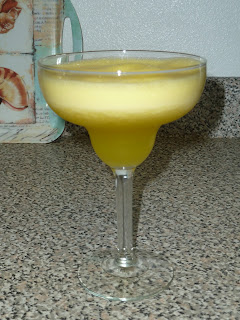 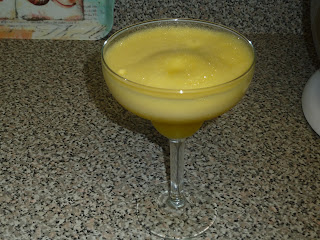 7) Enjoy (?)
8) Note to self: Use this internet thingy to look up a real margarita recipe next time instead of just pulling it out of your ass.

Verdict: Meh. The lime didn't really go with the watermelon (which has a very bland taste in liquid form) so in the spirit of experimentation I poured a second glass without the lime. Pretty much the same thing: bland watermelon taste only without the jarring appearance of lime.

As far as the the yellow watermelon - which I never knew existed until today - is concerned, it is awesome. Softer and easier to cut up than a regular watermelon, but tastes the same and is as nice and juicy with fewer seeds. Just eat it like a regular watermelon and find another excuse for raiding the liquor cabinet.
Posted by Melinda at 10:06 PM
Labels: Foodie Stuff